Women, Stand UP and be Counted 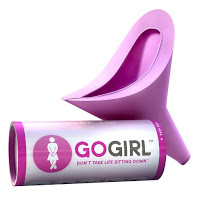 Facebook
Twitter
Pinterest
WhatsApp
So there you are, a 5’2″ woman, and today, you’ve decided to be a 6′ man (because gender is as fluidic as is race and height). The lines at the public restrooms are shorter for men than they are for women, and you want to saddle up between Steve and Jerry and take a whiz. No, there are no privacy guards, but as a man, you have a right to whip it out and stand hip to hip as you relieve yourself. Except that you only decided to be a man – today. That means that there hasn’t been time for messy and painful surgery and you’re not completely sure that you want to be a man tomorrow.

Don’t worry, your neighborhood Target has you covered! Keep your Go Girl in your purse at all times, or maybe in your pocket if you’re a guy that day, and urinate with Jerry and Steve meat gazing you – with pride.
It’s available in purple, which is not the color of a healthy penis, but the guys in the men’s room aren’t going to believe that you have a schwanz anyway. Could any product be more progressive?