Will Obama use Healthcare to Target his Political Enemies? 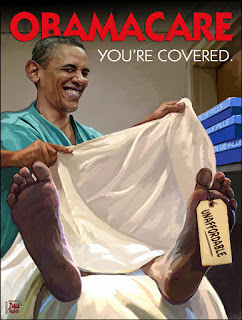 We’re all fellow Americans right? We disagree on how the government should be run. Some are happy with more taxes, some with less taxes and still others feel that their particular pet projects should be funded by taxes coming from somebody (anybody) else. However under this administration, there are Americans and there are Americans – how you vote being the deciding factor.
We know that the Obama Administration chose to punish political adversaries over the past three years by using the Internal Revenue Service to target them. (more here on that).
America (foolishly) opted to put its healthcare in the hands of the Federal Government. The program’s teeth come from the Internal Revenue Service because, appropriately, the US Supreme Court said that ObamaCare is a tax.
In January of 2011, Rep. Michele Bachmann claimed the IRS planned to hire 16,500 IRS agents to police Obamacare compliance. CNN reported at the time that the number cited by the Minnesota Congresswoman originated in a GOP committee report, based on a preliminary estimate from the Congressional Budget Office.
Characterizing Obamacare as a tax under the purview of the IRS is not mistake. The near mythical authoritarian power of the IRS will be used to make sure Americans do not challenge Obamacare and unquestioningly submit to its unprecedented intrusion. And when you combine the IRS attack on Obama’s political opponents, now heavily documented by Obama’s friends in the mainstream media and the subject of an upcoming Congressional investigation—is it so difficult to believe that our healthcare will now be doled out based on political affiliation to the Democratic Party?