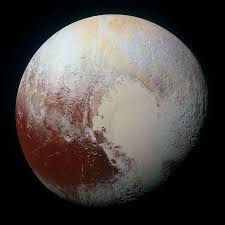 Old NFO and other Sci-Fi writers take note. There is grist for stories set on Pluto as the science fact is disclosed.

Ever since NASA’s New Horizons spacecraft flew by Pluto last year, evidence has been mounting that the dwarf planet may have a liquid water ocean beneath its icy shell. Now, by modeling the impact dynamics that created a massive crater on Pluto’s surface, a team of researchers has made a new estimate of how thick that liquid layer might be.
The study, led by Brown University geologist Brandon Johnson and published in Geophysical Research Letters, finds a high likelihood that there’s more than 100 kilometers of liquid water beneath Pluto’s surface. The research also offers a clue about the composition of that ocean, suggesting that it likely has a salt content similar to that of the Dead Sea.
The research focused on Sputnik Planum, a basin 900 kilometers across that makes up the western lobe the famous heart-shaped feature revealed during the New Horizons flyby. The basin appears to have been created by an impact, likely by an object 200 kilometers across or larger.
The story of how the basin relates to Pluto’s putative ocean starts with its position on the planet relative to Pluto’s largest moon, Charon. Pluto and Charon are tidally locked with each other, meaning they always show each other the same face as they rotate. Sputnik Planum sits directly on the tidal axis linking the two worlds. That position suggests that the basin has what’s called a positive mass anomaly — it has more mass than average for Pluto’s icy crust. As Charon’s gravity pulls on Pluto, it would pull proportionally more on areas of higher mass, which would tilt the planet until Sputnik Planum became aligned with the tidal axis.

A positive mass anomaly would make Sputnik Planum a bit of an odd duck as craters go. “An impact crater is basically a hole in the ground,” Johnson said. “You’re taking a bunch of material and blasting it out, so you expect it to have negative mass anomaly, but that’s not what we see with Sputnik Planum. That got people thinking about how you could get this positive mass anomaly.”
Part of the answer is that, after it formed, the basin has been partially filled in by nitrogen ice. That ice layer adds some mass to the basin, but it isn’t thick enough on its own to make Sputnik Planum have positive mass, Johnson says.
The rest of that mass may be generated by a liquid lurking beneath the surface.

Like a bowling ball dropped on a trampoline, a large impact creates a dent on a planet’s surface, followed by a rebound. That rebound pulls material upward from deep in the planet’s interior. If that upwelled material is denser than what was blasted away by the impact, the crater ends up with the same mass as it had before the impact happened. This is a phenomenon geologists refer to as isostatic compensation.

Water is denser than ice. So if there were a layer of liquid water beneath Pluto’s ice shell, it may have welled up following the Sputnik Planum impact, evening out the crater’s mass. If the basin started out with neutral mass, then the nitrogen layer deposited later would be enough to create a positive mass anomaly.
“This scenario requires a liquid ocean,” Johnson said. “We wanted to run computer models of the impact to see if this is something that would actually happen. What we found is that the production of a positive mass anomaly is actually quite sensitive to how thick the ocean layer is. It’s also sensitive to how salty the ocean is, because the salt content affects the density of the water.”
The models simulated the impact of an object large enough to create a basin of Sputnik Planum’s size hitting Pluto at a speed expected for that part in the solar system. The simulation assumed various thicknesses of the water layer beneath the crust, from no water at all to a layer 200 kilometers thick.
The scenario that best reconstructed Sputnik Planum’s observed size depth, while also producing a crater with compensated mass, was one in which Pluto has an ocean layer more than 100 kilometers thick, with a salinity of around 30 percent.
“What this tells us is that if Sputnik Planum is indeed a positive mass anomaly — and it appears as though it is — this ocean layer of at least 100 kilometers has to be there,” Johnson said. “It’s pretty amazing to me that you have this body so far out in the solar system that still may have liquid water.”