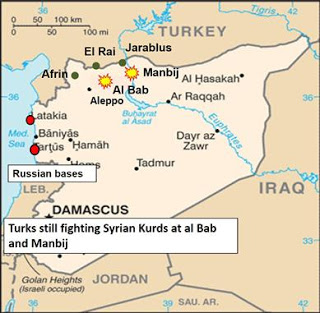 Facebook
Twitter
Pinterest
WhatsApp
If the situation in Syria sounds confusing, it is. There are a number of groups engaged in fighting, each with a different sponsor (or sponsors) and each with a slightly different agenda. That many great powers each has its own proxy which operates to the beat of a different drummer should disturb everyone.

I’ve mentioned this before, but the US finds itself at odds with Turkey – but US air missions originate for the most part from Incirlik Air Force Base. Incirlik is located in Turkey. Turkey’s mission in Syria is to eliminate the Syrian Kurds, American allies. Separate press services reported that elements of the Republican Guard of the Syrian Arab Army are cooperating with the US-backed Syrian Democratic Forces and other Syrian Kurdish forces in fighting the Turkish-backed Free Syrian Army (FSA) rebels and the Islamic State at al Bab.

Turkey supports and has given refuge at times to ISIS, an enemy of the US. Yet at times in Syria, the Turkish armor takes on ISIS positions for time to time in support of Syrian Army. Turkey has vowed to depose the Assad Government.

Is the cooperation between the Syrian army and the Syrian Kurds is a marriage of convenience to prevent the Turks and their proxy from claiming control of al Bab?

I expect to see the Assad government turn on the Kurds after they have beaten the Islamic State and the al Nusra Front and induced the Turks to withdraw their forces from Syria. Since Russia backs Assad and the US backs the Kurds, there is an opportunity for trouble.

Then there’s Al Qaeda (backed by the Saudis as always), which finds itself as an American ally in Syria – the very height of irony.

I haven’t gone into Russia, a large player in Syria now, and Iran – equally as large but in a different way. Maybe next week. They’re playing chess with the Turks, who are playing checkers.

And when President Trump defeats ISIS, who will fill that void that remains? America has a rotten track record of diplomacy in the Middle East over the past twenty years, but maybe General James (Mad Dog) Mattis, the new SECDEF, has some ideas about that. If anyone can be trusted, it’s General Mattis.  I favor David Petraeus for SECSTATE, but it might require a presidential pardon to get him there. Petraeus and Mattis would be a potent combination. The progs don’t like the idea of generals managing things like the war on the weather and a nuclear Iran. That means that it must be a great idea.

John (Wooden-Head) Kerry has vowed to be a malignant critic of anything that the Trump Administration does as they unwind his legacy at the same time that they unwind Barack’s. Will anyone pay attention since the only forum he’ll have is MSNBC?

The Democrat Party has diminished to be a bi-coastal organization for elitists and their hirelings/clients. As it atrophies further, howling “Islamaphobia, racism, sexism, homophobia and micro aggression” with it’s social justice warriors carrying their rainbow (and Mexican) flags; will anyone care anymore outside of the enclaves where Soros’ money buys loyalty of the brainwashed?