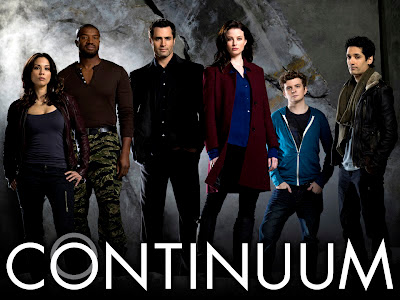 The Canadian-produced science fiction series focuses on the conflict between a group from the year 2077 who time-travel to Vancouver, BC in 2012-13  A police officer (played by veteran actress Rachel Nichols), is swept into the time vortex and accidentally accompanies them. The rebel group Liber8 decides to continue its violent campaign to stop businesses of the future from replacing governments with their own rules, while the police officer endeavours to stop them without revealing that she is also a time traveller.

As the plot develops through the first season the presence of other time travelers from the future complicate the evolving plot and help define the characters (in a good way).

Continuum the best series on SciFi since Stargate. The theme is intriguing, the accent on time has endless possibilities, Rachel Nichols is charming and seems very well suited for someone from the future trapped in the past. The veteran actors (Victor Webster, Erick Knudsen, Stephen Lobo, Lexa Doig and Roger Cross) around Nichols support her central role in a convincing and uncontrived way. If you enjoy good science fiction, good acting and an intriguing plot, I think that you’ll find Continuum a breath of fresh air when compared to other recent SciFi productions such as Defiance and Falling Skies, that fail to deliver.
MUST  SEE