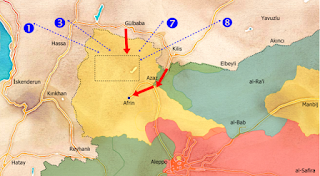 Republican People’s Party (CHP), Kemal Kılıçdaroğlu, opposition party leader to the ruling Justice and Development Party (AK) is not criticizing the radical Muslims that have control of Turkey. One reason that Kılıçdaroğlu is being careful to not criticize the Operation is that critics get arrested.

The Interior Ministry said on Monday, the 29th, a total of 311 people had been held for “spreading terrorist propaganda” on social media in the last 10 days. Detainees have included politicians, journalists and activists. On the 28th, President Erdogan accused doctors who opposed the campaign of betrayal.
Turkish authorities warned they would prosecute anyone opposing, criticizing or misrepresenting the incursion in northern Syria. The arrests show that the government is serious about suppressing criticism. CNN-TURK is the propaganda arm of the Erdogan government and continue to spew optimistic rhetoric about Turkish attacks on Kurds who did not attack or threaten Turkey — referred to as “terrorists”.
Operation Olive Branch (Turkish Invasion of Syrian Kurdistan)

Eleven days into the operation, Turkish forces and Turkish proxy forces have not captured Afrin. On the 29th, Syrian Kurdish fighters mounted a counter-attack to retake the hill between Afrin and Azaz that the Turks obtained disputed control over on Sunday. The Turks scheduled a press session with CNN-TURK to announce victory in regard taking the hill for the 29th, but canceled it because the hill was not secure.

The might of a Turkish armored division supported by militia, aircraft and artillery can’t take a hill in Syria…how embarrassing. How pathetic. (The tankers know when they move their tanks forward, US made fire-and-forget missiles blow them up.)

The Syrian Kurds in Afrin are negotiating terms ceding control to Damascus. A spokesman told Izvestiya on the 29th, “We are ready to give up the city and the areas surrounding it, but we must receive guarantees that our interests will not suffer by doing so.”

Since 22 January, the Russians have been advising the Syrian Kurds to transfer control of the city and its environs to Damascus in order to limit the Turkish invasion. Russia has been negotiating the terms of a compromise on behalf of the Syrian government.
The Syrian defense ministry spokesman said the Syrian army is prepared to march into Afrin if ordered. That would present the Turks with another complication to President Erdogan’s quick operation against “terrorists” in northern Syria.
The Russians are engaged in a balancing act with the Kurds, similar to the US, but on a smaller scale. The Russians oppose Kurdish autonomy, but also protected them the Kurds against the Turks during Operation Euphrates Shield. The Russian solution is for the Kurds to work with the Syrian government and under its protection, rather than try to negotiate a separate status.
Comment:

Killing Kurds for fun and profit (a Turkish national pastime that runs back well over a century) has proved to be much more difficult than the Turks anticipated in Syria primarily because the Kurds were trained and armed by the US. The US provided DEFENSIVE weapons that are effective against the combined arm mix that the Turks are throwing at them.