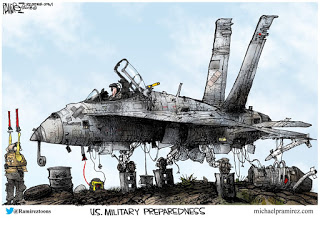 It Will Take Time
The US Military should be second to none, but during the dark, dismal, years of Obamanation, we saw things slide. Social justice overtook war fighting as the military’s priority and we focused a lot of energy on stopping global warming. Things weren’t repaired and vital military missions kept our ships at sea far longer than they should have been. Retention of personnel became an issue when the focus shifted from welfare and morale to transgender matters.
Matthew 13:27-28
So the servants of the householder came and said unto him, Sir, didst not thou sow good seed in thy field? from whence then hath it tares?

He said unto them, An enemy hath done this.
Barack Obama spent the eight years of his presidency preaching that America was a nation in decline. He bowed and scraped and acted the fool. Nobody outside the US respected him and many in the US didn’t either. The military’s decline reflected the Obama Doctrine.
Those sad and spare years have been replaced by the Trump Presidency and we have a president who is optimistic about what we can do – but he has said that he inherited a mess. Who can disagree with him. However it will take time to fix the damage that was done.

I had an opportunity to spend some time in Great Britain last August and see the decline (and rot) in Her Majesty’s Navy. They’ve kept up special forces and the SAS is still capable, but it’s a long road back. And with their emphasis on recruiting Muslims, transgenders and deviates into the ranks, it will tend to push the straight, normal folks out and their capacity to recruit will decline farther. The whole “it’s good to be able to cry,” campaign (we can’t get the best so we’ll settle for the rest) has never been a good idea when it comes to war fighting.

The US will not follow the path that the UK has set for itself thanks to a change in leadership. MAGA

[…] For those who control the levers of power in Washington, and for the global special interests they partner with, our campaign represents an existential threat.
[…] This is not simply another 4-year election. This is a crossroads in the history of our civilization that will determine whether or not We The People reclaim control over our government.
The political establishment that is trying everything to stop us, is the same group responsible for our disastrous trade deals, massive illegal immigration, and economic and foreign policies that have bled this country dry.
The political establishment has brought about the destruction of our factories and our jobs, as they flee to Mexico, China and other countries throughout the world. Our just-announced jobs numbers are anemic, and our gross domestic product, or GDP, is barely above one percent.
Workers in the United States, are making less than they were almost 20 years ago – and yet they are working harder. It’s a global power structure that is responsible for the economic decisions that have robbed our working class, stripped our country of its wealth, and put that money into the pockets of a handful of large corporations and political entities.
[…] This is a struggle for the survival of our nation. This election will determine whether we are a free nation, or whether we have only the illusion of Democracy but are in fact controlled by a small handful of global special interests rigging the system. This is not just conspiracy but reality, and you and I know it.
[…] They control the Department of Justice, and they even clandestinely meet with the Attorney General of the United States – in the back of her airplane, while on the runway – for 39 minutes – to most likely discuss her reappointment in a Clinton Administration just prior to the Attorney General making a decision over whether or not to prosecute Hillary Clinton.
Likewise, they have corrupted the Director of the FBI to the point at which stories are already saying the great men and women who work for the FBI are embarrassed and ashamed to what he’s done to one of our great institutions. Hillary Clinton is guilty of all of the things that Director Comey stated at his press conference and Congressional hearings, and far more – and yet he let her off the hook, while others lives are being destroyed for far less.
This is a conspiracy against you, the American people. (link)