Part of the nostalgia of being on the road is thinking of home. I do in the quiet moments, when people aren’t shouting and demanding, or when the waiter doesn’t tip somebody else’s food in my lap while navigating tables placed too close together. Or when I’m rushing for the airport in a taxi and being stuck in Hong Kong traffic – or Los Angeles traffic, which is much the same.
In those moments, I often reflect on past moments, and in this case, as a boy growing up in Arizona. We had an International Scout and used to go to different lakes and reservoirs in Arizona to fish. Fishing should be part of every boy’s life because it requires you to be patient, quiet, to learn to tie knots and to clean your catch. If every boy did that, I think that the world in general would be a better place.  You have to focus on the cast placement while insuring that there is no loop on the spool of fishing line that can lead to a tangle.
As with my grandfather and his Scout and canoe, I have a canoe that travels with me for fishing purposes. Continuity and context is important for myself and for my grandchildren.
The road (less traveled) to the White Wolf Mine: 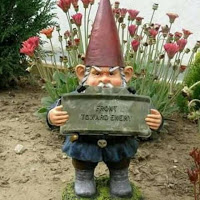 Somebody e-mailed me with a concept picture. A gnome holding an M18A1 Claymore, directional anti-personnel mine. Usually they are command detonated (wire out the back) but there is a booby trap option to signal the mine to explode too.
If you’re going to use a Claymore around fixed fortifications, you should consider putting sand bags behind it because it’s only “generally” directional.
The presence of a gnome holding a Claymore mine might give pause to somebody walking up on the place? But who knows. I don’t think that there will be a lot of uninvited guests out at the White Wolf Mine.
The delay from the forest fire has now past and the crew is on the build again. I asked some of the workers who are building the hovel what they thought of North Korea. They said, “Nuke the cities, drive them before us and listen to the lamentation of the women.” That’s rural Arizona. They didn’t vote for Hillary.