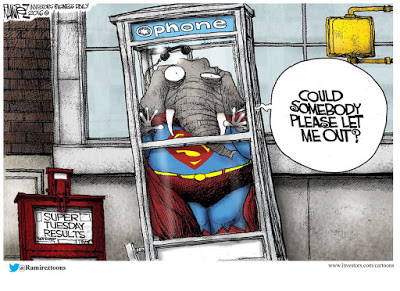 On Monday, I predicted the outcome of the GOP primaries on Tuesday (yesterday). This is what I predicted and how the races actually turned out:

In terms of delegate count, Trump emerged as the winner as predicted. I called some well, and missed the boat on others. It’s a good thing that I don’t make a living doing this or I’d share the same gulag with poor old Dick Morris (anyone remember him?). I really missed Minnesota and Oklahoma. Virginia was much closer than I thought it would be and Alabama went much harder for Trump than they thought that they would. I won’t quit my day job.

Rubio finally won a state and that means that he’ll be energized and based on media reports, plans to spend $25 million on negative ads against Trump in Florida, where he trails by over 20%, over the next two weeks. Rubio is owned by the moneyed special interests and it will be interesting to see what all that money actually buys him. He spent $12 million on ads for the election today, Trump spent $1.1 million. 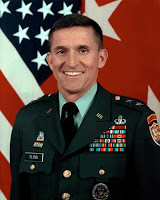 Former foreign policy officials told Reuters that retired Lieutenant General Michael Flynn, who was chief of the Defense Intelligence Agency under President Barack Obama from 2012 to 2014, has been informally advising Trump on world affairs. Flynn was spotted last year at a “gala celebration” for Russian media outlet RT, sitting at the same table as Russian president Vladimir Putin.