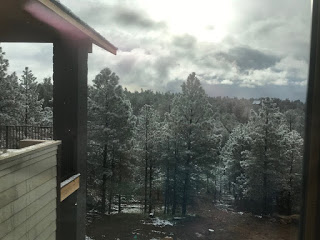 Whiskey-Tango-Foxtrot, over… It’s May 23 and it’s still snowing in Arizona. Photo from the dining room window this morning.
I joke about the ‘coming ice age’ but it will be interesting to see how things look NEXT year. It’s been a cold, wet winter and spring this year. If we are to get another wet year on the heels of this one — the trend would be interesting.

More on China (continuation from yesterday)

A number of you had great thoughts and I appreciate your comments. China sold its populace the premise that they could loot the US three ways from Sunday perpetually. Wages have risen in China precipitously and it’s not an inexpensive place to manufacture anymore. The great rush of Western companies to China is over and they are beginning to leave China for other locations. The Belt Road Initiative, upon which so much is based, is finding resistance in some countries and it’s more expensive than projected, largely do to corruption in China (everyone expects Pakistan and its like to be corrupt).
China is on a military build up, and their navy will soon be the largest in the world. They have to pay for that. The “America First” philosophy put forth by President Trump has thrown a monkey wrench into the gears. As Jim pointed out in his comments, they are indeed beginning to sound desperate.

Would the airlines allow me to bring an emotional support wolf onto an airplane? Sometimes I need to travel and having people meet me at the arrival airport with a handgun works, but is there a better way? Nothing says emotional support like a wolf, which is a loving animal that protects members of its pack (namely ‘me’) to the death and views all other animal and human life as protein.
How much emotional support could I get from a chihuahua? And does hauling a chihuahua around constitute cultural appropriation since the breed originated in Mexico? Ever since taco Tuesday was canceled in Southern California, denounced as racist, I’ve tried to be careful and bend to the will of the progs who want to run my life.
Is a wolf progressive? If it is, I’m sure that there is a grievance group out there advocating for using wolves for emotional support, but I haven’t found any of them on the Internet.
And would the airlines require me to buy a second seat for the wolf, or would they allow me to put it on my lap? One thing is sure, they’d think twice before throwing me off the airplane.

Don’t Cry for me Venezuela

Venezuelan President Nicolas Maduro proposed holding early parliamentary elections, judging that he will win. At the end of a march commemorating the anniversary of his re-election on 20 May 2018, he said, “Let’s see who gets the most votes! Let’s find a political, constitutional and democratic path forward.” The next National Assembly elections are supposed to be held in 2020.
Maduro’s public statements indicate that he senses the worst of the threat to his tenure has passed. His willingness to hold talks with some opposition leaders in Oslo is a sign of his increased confidence, not a sign of any willingness to compromise, reform or make concessions. He is showing that he is magnanimous by listening to the political opposition. 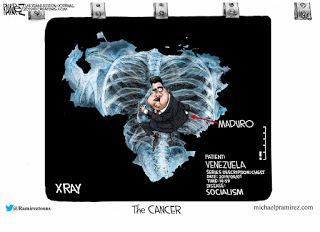 Juan Guaido has never run for president. He is president of the National Assembly. The president of the national assembly can succeed as interim president of Venezuela in the event of the incapacitation of the elected president or if he is found unfit for office. The Venezuelan supreme court has declared the national assembly in contempt and all its actions are “null and void,” including declarations against Maduro’s fitness for office.
Venezuelans reacted negatively to Juan Guaido’s references to US military support and international pressure. One analysis indicates enthusiasm for the opposition alternative declined precipitously between February and April as threats of outside intervention increased. Patriotism appears to be stronger than support for political reform.
There may not be food, and money may only be useful as toilet paper and bookmarks, but the Venezuelan people are clinging to their socialist overlords with a vengeance. Good for them. Let them eat cake!
I’ve never known any people so willing to celebrate terminal cancer as the Venezuelans.