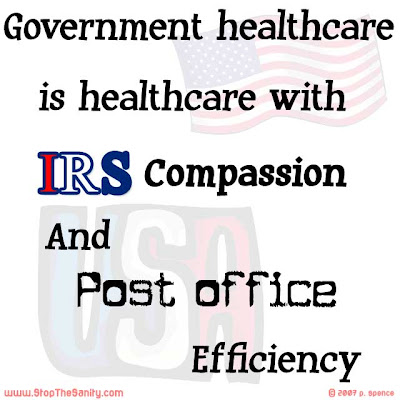 Government efforts to control the cost of healthcare have all failed. Cost control is a feature of decentralized, competitive markets, not of centralized bureaucracy. Incentives, not mandates, reduce costs. Anyone who has ever run a business understands that there are constant variations in costs for labor, facilities, raw materials, etc. In order for any business to prosper, it must respond quickly to market forces. Government bureaucracies carefully set regulations and reimbursement rates through broadly applied rules that are bent based on political considerations. They move slowly. They NEVER respond to market forces.

Medicare costs (overseen by the same government that would manage the entire national healthcare system) enjoy huge market power in purchasing and it should be the easiest to control in terms of managing costs. The truth? Between 2000 and 2007, Medicare’s hospital and physician reimbursement rate soared annually by 5.4% and 8.5% respectively.

Medicare was structured as a ponzi scheme. Medicare tax contributions don’t come close to fully funding the care it doles out. Today’s workers subsidize today’s recipients to the extent that it requires 3.7 workers to fund care for EACH Medicare recipient. So if you think that the money you’re paying into Medicare today is high, it’s about 25% of what it should cost to fully fund it. The Medicare system in America is broke and it will require a massive infusion of tax money to keep it rolling. As the nation ages, the numbers will become even more significant.

Expanding government’s inability to come to grips with any major problem or to pay its bills without unrestrained borrowing against future generations should teach us that this is NOT the way to reform healthcare.