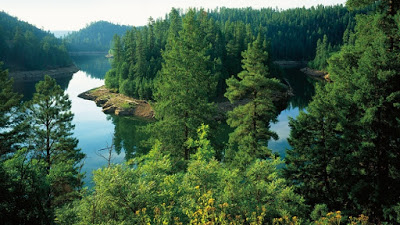 Facebook
Twitter
Pinterest
WhatsApp
I’m about a five weeks out from the big bounce. It has been roughly two years in the making from concept to completion and while there have been a few roadblocks, and the annoying cost over-runs and changes for cause to the original design (eliminate the master bedroom fireplace, as an example), it’s not been as bad as it could have been.

Blue Ridge Reservoir (below), six miles as the eagle flies from the White Wolf Mine.

How would my grandchildren ever really know anything but the fiction of the suburbs if they didn’t haver the opportunity to spend time with grandpa, fishing, shooting, hiking, and clawing over rocks in the 4×4? The answer is that they wouldn’t. They would go on, thinking that the world they inhabited was the ‘real’ world – video games, strip malls, unending traffic, etc. I grew up in the very rural Intermountain West so I knew the difference when I lived in the synthetic land that paid the bills.
I’ll start moving stuff into the garage in a little under two weeks once the garage doors are installed. I’m going to try and get all of the tools, extra bedding and detritus of a life stuffed into to two U-Haul loads and then get professional movers to pack the furniture and the stuff I don’t want broken into a final load using Bekins or Mayflower or one of those fancy movers.
I haven’t completely solved the bandwidth problem and it may be that the whole blogging thing will go the way of the dodo bird and the iron horse. I’ve been too busy elsewhere paying for the compound to spend time there on the problem. It remains to be seen if I land a contract that I’ve been chasing – which will take me away from the WWM more than I want it to. Decisions.
Life only offers us two things: time and the choice as to how to spend it. It’s not a polemic, but it’s religious in that there is a sense of peace when you spend your time well. Most of we little people spend our time earning money that we spend on those we love…and buying guns, and ammo, and knives, and canoes, and boats, and so forth, that we don’t get to use enough.