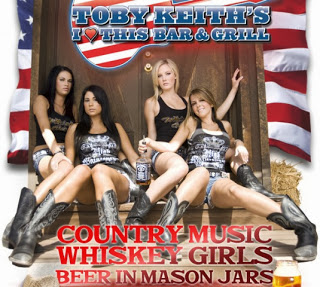 Toby Keith (a lifelong member of the Democratic Party and hypocrite), a Country Western singer who made a fortune selling songs such as Bullets in the Gun, has banned firearms in his restaurants. (Fox News)
I’ve been at his restaurant in Rancho Cucamonga, CA. The food wasn’t all that good. The waitresses were pretty. I carried a handgun. I doubt that I’ll go back but if I did I would carry a firearm then too. I’m blogging about it because not everyone who leaves a Toby Keith restaurant is a ready-made victim.
The Fox News team that did the story suggested that firearms advocates are avoiding the restaurant. I suggest another scenario. They’re ignoring Toby’s Rule because they want to look at the pretty girls. Let’s face it, criminals will carry firearms because they’re criminals. Honest Americans will because they want to protect themselves and those they love from criminals.
Toby Keith is irrelevant.