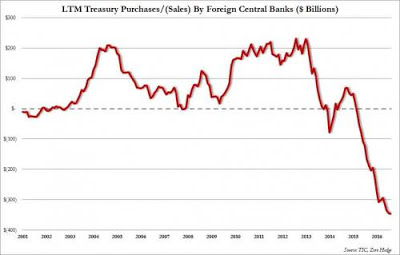 Facebook
Twitter
Pinterest
WhatsApp
Both foreign central banks, sovereign wealth funds, reserve managers, and virtually every other official institution in possession of US paper, is liquidating their holdings at a rapid pace.

China is doing it to offset the pressure to devaluate currency. Saudi Arabia is selling to offset the declining revenue from the sale of oil.
There is still private demand for US debt. pension funds, other institutional investors, hedge funds, and others are buying treasuries.
If private investors should fail to buy these bonds, it is likely that the Federal Reserve would monetize US debt (print more currency). The Federal Reserve has been hinting at an increase in interest rates. Doing that without changing the job killing rules that bind businesses and taxes such as Obamacare, would lead to an official recession that no gaffed statistics could hide. (figures lie and liars figure)
If the US Government was able to reduce its size and if it was able to renegotiate entitlements with the entitled (reducing what is paid out), the ship might right itself…maybe. Add massive oil drilling and exportation along with the exploitation of coal gasification technology to create domestic electricity cleanly — and we might actually pull out of it.
Meanwhile, elsewhere…

Where are Slick Willy and Hillary in all this? European Union Times

Take a moment read the whole article and make your own call. It’s clear that the EU Times believes that Hillary is completely corrupt. The EU Times is often guilty of ‘yellow journalism’ so you have to read it and then source their information yourself – in much the same way you’d do with the NY Times, Washington Post or Izvestia…or even Fox News.

…the Bank For International Settlements (BIS) registered a $1.8 billion transfer from the Clinton Foundation (CF) to the Qatar Central Bank (QCB) through the “facilitation/abetment” of JP Morgan Chase & Company (JPM).

Might the Clintons be preparing for an exit to Qatar if the election falls to Trump? I’m not predicting, just positing the question for the blogosphere to ruminate over.