I’m going to do a couple of blog entries today.

I’ve been scouring the internet for the place the bus is supposed to pick me up and deliver me to the Tea Party Protest. After all, I expect some insurance company to give me a pre-made sign, a sack lunch, a t-shirt, an “envelope” for my participation and a ride home at the end of the day… Because this is all fake, right? 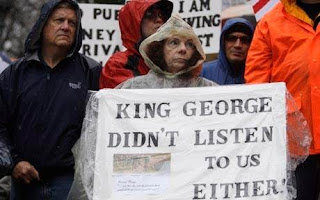 I was at Searchlight, Nevada where CNN reported that “two dozen people” gathered together at Harry Reid’s home town to kick off the Tea Party Express that will wind its way across America.

I was at Santa Ana, California last 4/15 when the media didn’t even show up because the crowd was made up of “rednecks”, firearm owners, mostly employed, traitors to their race (non-white people), women, and people who bathed (how can it be a real protest if people are well dressed? – Sen. B. Boxer [D-CA]) — essentially people who don’t matter to either the state run media or the oligarchs in Washington, DC.

Today I’ll be at Santa Ana at noon, and in Corona, California in the afternoon to witness this rag-tag band of PATRIOTS (it’s a dirty word now in Washington, DC these days – they sling the word as if it was mud) who want to affirm individual responsibility, smaller government, rational taxation, affirmation of the Tenth Amendment (State’s Rights), etc. And I want to invite “progressives” to come and look at the future of America – because hope and change has taken on a whole new meaning.