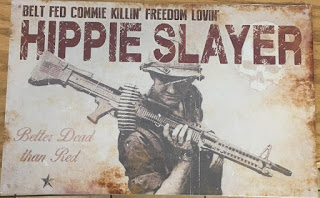 Facebook
Twitter
Pinterest
WhatsApp
TRIGGER WARNING: a statement at the start of a piece of writing, video, etc., alerting the reader or viewer to the fact that it contains potentially distressing material.
I never knew what a trigger warning was, but from what I’ve been told, university classes can be dedicated to discussing them. Such is the tender nature of progressive feelings and sensibilities. I think that every blog posting on Virtual Mirage should contain a trigger warning, but since I’m not a prog, it won’t.

Students at UC Santa Barbara passed a resolution in support of mandatory trigger warnings for classes that could contain potentially upsetting material. Professors would be required to alert students of such material and allow them to skip classes that could make them feel uncomfortable.

SAFE SPACES: Safe spaces are meant to provide a degree of shelter from emotional trauma. Safe spaces are public “spaces” for people to feel “safe” in, without needing to fear about being judged or subject to offensive persons and material. Safe spaces would include groups like LGBTQ meetings, student unions comprised of minority races, rape victim support clubs, and other activities that involve intimate personal knowledge, sharing and understanding, and where any comments formed out of prejudice and/or ignorance are called out.

I have noted in my reading that nowhere in progressive literature is there a safe space discussed for freedom loving, Trump supporting, constitutionalists, and heterosexuals on campus.  Why is that? What about the need for combat veterans, cops and steel workers to have a prog-free environment where they can relax with their favorite beverage in company with attractive heterosexual women and say what they really feel about the freaks in society who they’re compelled to be nice to by social conventions? (yes, I know, it’s called “a bar“)
CNN WEIGHS IN ON THE RAPE CULTURE
Now there is a progressive war against lyrics (more here)

(CNN) A couple from Minnesota has re-imagined the classic Christmas song “Baby It’s Cold Outside” for a 21st-century audience, changing the song’s lyrics to emphasize the importance of consent.
Singer-songwriters Lydia Liza and Josiah Lemanski, both from Minneapolis, said they were inspired to rework the song after bonding over a mutual dislike of the original’s lyrics, which were penned in 1944 by Frank Loesser. The duet features a man trying to dissuade a woman from leaving a party despite her repeated protestations that she has to go home. “What’s in this drink?” is one of the female lines. “What’s the sense in hurtin’ my pride?” implores the male voice.

The progs felt that “Baby it’s Cold Outside” was a prelude to rape. These progs, presumably egged on by others of their ilk, looked at the most sensual, seductive song in Christmas history and pretended that the comments and responses of a man seducing a woman is the same as coercion, that is, rape.

Bullying and feminist hysteria followed, asserting that the song was designed by “the patriarchy” (whoever that is) as a weapon to force womyn to ‘give it up’. They contend that flattery is rape. The mating game is a prelude to rape.
MYSOGYNY AND THE RAPE CULTURE
The progs have even turned on Lady Gaga for her rendition of “The Lady is a Tramp” with Tony Bennett in an ongoing effort to damn the classics for their promotion of a rape culture. The lyrics are suggestive that a woman who likes doing various activities must rely on a man to pay her way and is therefore a sex slave to “the patriarchy” (that word surfaces again).

Progressive icons used President Trump’s marriage to his wife, Melania, as an example of this sort of reprehensible behavior. Clearly there was some sinister misogyny at work when a billionaire male courted and married an attractive female, who was younger than he was.

In this way Tony Bennett displays unabashed mysogyny. Complicit, Lady Gaga, a victim of a male dominated culture and androcentrism, is dominated and forced to ‘give it up’, to an older male of means – compelled to admit that she is a tramp.

Misogyny (/mɪˈsɒdʒɪni/) is the hatred of, contempt for, or prejudice against women or girls. Misogynycan be manifested in numerous ways, including social exclusion, sex discrimination, hostility, androcentrism, patriarchy, male privilege, belittling of women, violence against women, and sexual objectification.

I don’t know whether or not Lady Gaga is a tramp, but her progressive credentials were tarnished. But the performance was masterful. Enjoy.