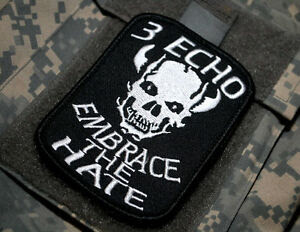 I wore my “3 Echo – Embrace the Hate” ball cap yesterday. A couple of people commented on it. Which is strange because it’s an understated cap. The comments ran this way, “you look mean.”

I’d been working in the garage most of the morning from sun-up, remodeling, putting up new industrial shelving, etc. I went out to go shooting and ended up helping a stranded motorist who rolled a side-by-side instead.

I may have looked a bit peeved not to have been able to shoot. Thus the comment that I looked mean. But I still helped. Mean and all. In the mountains, you stop and help people who are in trouble because that’s likely all the help they’ll get. Because they had trouble out of cell phone range, they have a walk if I hadn’t stopped. Maybe it’s about being a good Samaritan but I really didn’t think of the good book when I stopped. 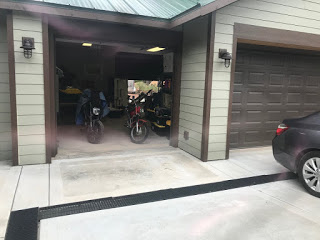 For those of you who have asked what happened to my Ducati Diavel, here (above) is a photo of the SheDevil, waiting to be ridden. With the monsoon in full swing, we have a lot of thunder showers, and wimp that I am, I ride the bike less. I don’t like riding in hail and cloudbursts.
Then I went to the Fire Department to help prepare for the annual Blue Ridge Fire Dept. Appreciation Dinner. In the rural place where I live, the only government entity other than the county seat, 70 road miles away, is the Fire District. Since I’m on the governing board, I am expected to attend.
The dinner put on by the Red Hot Mamas (fire department boosters) and is the social event of the season. 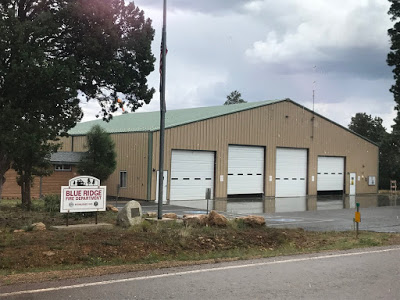 It’s a fully staffed fire department in an area where there are no cities. Frankly, the presence of a professional fire department with paramedics 24/7/365 heavily influenced my purchase of the White Wolf Mine property. There are 8 bays and 8 pieces of fire apparatus. Later, when the shindig starts, they’ll be pulled out onto the front and rear aprons and the party for those who live up here will go on inside. BBQ porterhouse steaks or chicken breasts are on the menu. While I do like a firm breast, I picked steak. If the Democrats win the election, they’ll push to kill all cows on the planet. So I figured that I should enjoy it now. After all, we only have ten years to live before the polar bears die (again) and the polar cap melts (again). However even if the polar cap melts, at 7,500 ft altitude, it’s not exactly going to be Water World.
This is the sermonette: Helping people is a matter of small moves and individual effort. It’s easy to not reach out, but is it the right thing? The few people who live in the area where I do keep the fire department running. If you have need of medical aid in the Central Arizona Highlands, these guys are the only ones who will be rolling to help. If not for them, aid would be hours away. People who live here make a conscious effort (and carry the total cost) to look out for others. There are no grand parades, no accolades, no cheering crowds. Just people doing what is right – and a shindig once a year. These are the sort of people who Hillary tagged as ‘deplorable’.

Mail Bag – The Weekend is Upon Us:

I’ll bake you a cake with a file in it to aid in your escape from custody.

Indeed it is. And because she is my youngest, and “the baby” even though she’s 27, there is a lot of concern for everyone’s wellbeing. She has had some health issues with the pregnancy (not major) and the medical team feels that it’s better if they induce now.

“Car-B-Que” down in Golden put on by Hagerty, my old car insurer. I get to rub elbows with Ferrari owners!

Jim confesses – My wife can fold a fitted sheet so she’s fine, but it looks like I’m going to jail.

You’ll be in the cell next to me. The time will pass. We can talk guns. Likely we’ll object to being released because it will interrupt the discussion.

RHT447 recalls his time under the standard –

When I went through Army basic, we had a Puerto Rican Drill Sergeant who took great glee in hollering at us on laundry day “Chu peeples get chore cheets togeder!”

What happens when you goose a ghost? You get a hand full of sheet.

Joetote admits – Folding a fitted sheet is my idea of terror when my wife doesn’t like the way it looks.

What married man has not felt those icy fingers of fear creeping up his yellow spine? And then there is the additional fear that she will say, “fine”…

WSF explains – Since I’ve never, not once, tried to fold a fitted sheet I would fail. Reminds me of an excuse the first Seahawk coach, Jack Pateria, gave when he failed a roadside sobriety check. “If you were wearing new cowboy boots, and had as many knee operations as me, you couldn’t walk a straight line either”.

The only good excuse is no excuse at all. Arrest them all, let the judge sort them out.

LSP preaches – What a great bear story. Hypothetical of course because all the white bears have been killed by the weather. Hence the great replacement by BOC.

Al Gore predicted the end of white bears (who would have died of shame at being white) by 2014, the same year we’d see the end of Arctic ice. It’s wonderful that we have oracles like Al Gore to listen to. AOC is another great oracle, who has her bartender credentials to fall back on if anyone questions her.

Brig wrote – That she doesn’t fold the fitted sheet. Just stores it in a pillow case.

I’d agree, but it doesn’t quite fit the ‘ship shape and Bristol fashion standard. It also doesn’t mean keel hauling, being flogged around the fleet, walking the plank, or kissing the gunner’s daughter, though. What works, works.