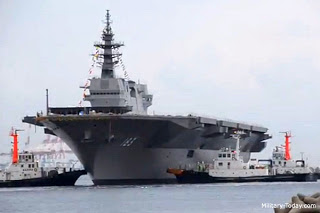 Facebook
Twitter
Pinterest
WhatsApp
This morning, I blogged about the new Japanese Destroyer-Helicopter Carrier Izumo. Perhaps it’s time to bring you all up to speed with the events of the past week in the Senkaku Islands that China is ardent to obtain.

Last Wednesday and Thursday a Chinese patrol stayed in the On Wednesday and Thursday a Chinese patrol stayed in the Senkaku Islands area for more than 28 hours, the longest intrusion detected to date. That patrol began the day after Japan announced the launch of its helicopter-carrying destroyer, Izumo. The correlation does not appear accidental. The Tokyo government made an official protest. The Chinese don’t care.
Last Saturday, four Chinese coast guard ships entered Japanese territorial waters near the Senkaku Islands and stayed for an hour.
On Sunday, The Japanese Coast Guard detected three Chinese coast guard ships sailing around the Senkaku Islands in the East China Sea just outside Japan’s territorial waters. Japanese press reported that was the 26th straight day of such Chinese patrols.
Thus far, no confrontation at sea has taken place. Chinese coast guard patrols have become more frequent. The next escalation step is they will become more aggressive in an effort to provoke a confrontation in which China will express injury and outrage.
China wants the Senkaku Islands and the oil underneath them. Japan doesn’t plan to cede control of its territory to China. (which China feels is supremely unfair)
This drama will continue to escalate and it bears watching.