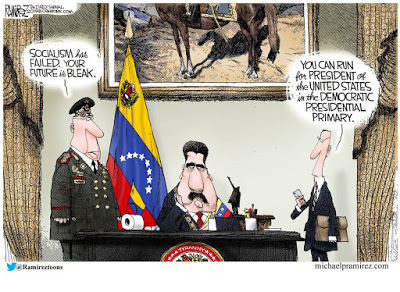 Things have stabilized. The Socialist dictatorship has not sent the army to kill the opposition because of dire warnings from both the US and Russia.


You never know when that may change, but for the moment, Maduro hasn’t accepted exile in Russia and the newly formed and recognized government has not been able to gain the traction necessary to oust Maduro and his band of thugs.


There are politicians in the USA that really want to turn the nation into a bad carbon copy of Venezuela. Riches to rags can turn them a quick buck and living out the rest of your life in Switzerland, spending what you were able to steal, watching your former country collapse appeals to them. None of them have American hearts.


The Green New Deal
Sometimes when people sit around a bar and drink shots, the talk gets outrageous and the more alcohol is consumed, the more crazy it gets. I think that’s how the Green New Deal came to pass. A bunch of progs drinking box wine and peyote had a bad reaction to the combination.

Kimberly Stossel (WSJ) By the end of the Green New Deal resolution (and accompanying fact sheet) I was laughing so hard I nearly cried. If a bunch of GOPers plotted to forge a fake Democratic bill showing how bonkers the party is, they could not have done a better job. It is beautiful. #GreenNewDeal

Eliminating air travel was a fun development that didn’t fly with the Hawiians. Sen Mazie Hirono (D-HI) on Ocasio-Cortez’s Green New Deal & trying to eliminate air air travel. “That would be pretty hard for Hawaii.” No problem, if you want to see Hawaii, take a sail boat.
In fact much of the Green New Deal works to eliminate industrial society by taking things back to the 1800’s, all the while, establishing a socialist state with strict government control on everything. In exchange for giving up your freedom, they’ll “take care of you”. And that always works out, doesn’t it?
How good is the Green Deal? Spartacus Booker supports it. That sealed it for me. 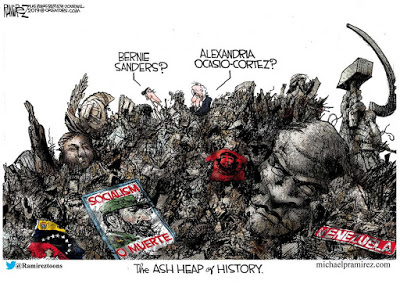 In order for the progressive movement to work, everything you do needs to be controlled and managed by government. Everything you buy needs to be measured and metered to insure that it meets with the current standard of political correctness. All law is fungible, which means that the “living Constitution” needs to change with the whim of the day. And ignorance of the current trend (which is the law) is no excuse. Fortunately, you can go to a re-education camp and can be taught to love Big Brother, if you’re not too old. If you’re old, which means unproductive as the State views it, you fall into the ‘death panel’ category as the ObamaCare plan envisioned it. Denial of medication, denial of care until you die. Then you can be cremated and somebody else can live in the government apartment where you once resided.

“If you want a vision of the future, imagine a boot
stamping on a human face – forever.” (Orwell)

Slaves are never armed by their masters, their betters. So you must be disarmed. If history teaches nothing else (Wounded Knee), you can’t retain the ability to defend yourself. If you retain that capacity, the government (which loves the little people like you) must neutralize you, because you can’t make an omelet without breaking a few eggs.
Example: It’s very progressive to wear a Che shirt in honor of a mass murderer. It’s not progressive to wear a shirt that says, “Make America Great”.
And now for the comic relief – 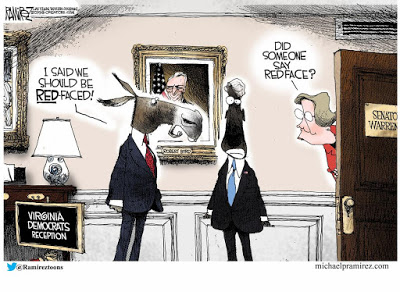