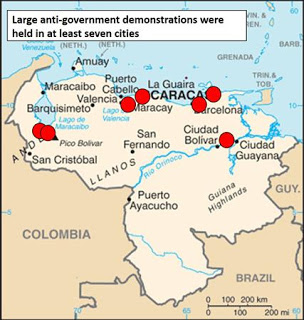 Facebook
Twitter
Pinterest
WhatsApp
It’s about granularity. Problems appears differently as you distance yourself from them. The Earth would appear as a pale blue dot if you stood on the surface of Mars (as the late Carl Sagan coined the phrase). The same is true of Venezuela and their embrace of socialism. From a cocktail party in the Washington Beltway, Venezuelan misery doesn’t impact you. The canapés are passed and you pick up shrimp on a cracker and stuff it into your mouth, chased by yet another glass of champagne, as you pontificate.

On the ground in a land where there is no food, soap, or toilet paper, the view changes. Venezuelans celebrated Youth Day yesterday, on 12 February, by demonstrating against the Maduro government, which still clings to a version of control. Large demonstrations were held in Caracas and at least six other cities.
Venezuelan opposition leaders, including President Juan Guaido, gave speeches to a crowd of thousands gathered in Caracas. Guaido tweeted, “Today all Venezuelans, in different states, accompany the relatives of the young people who lost their lives by repression of the dictatorship.”
The Maduro government remains obdurate, but the recent demonstrations have been the first sustained large-scale protests by the opposition in two years.
President Maduro’s refusal to permit delivery of food and other humanitarian aid is not sustainable. The opposition intends to challenge the road blocks with caravans of relief goods. The stocks of US aid in Colombia undermine Maduro’s insistence that all Venezuelan problems are the result of US economic warfare.