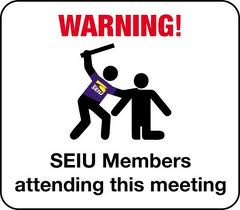 Facebook
Twitter
Pinterest
WhatsApp
I ask those of you who read this blog to support efforts to enact legislation that would prohibit government labor unions from directly or indirectly funding a political campaign where the politician running for office could be expected to vote for the salary rates of the workers that they represent.
I read an interesting article by George Will (here) on IBD. He cites the decline of public employee unions in situations where the government stopped acting as a collection agent for union dues.

After Colorado in 2001 required public employees unions to have annual votes reauthorizing collection of dues, membership in the Colorado Association of Public Employees declined 70%. In 2005, Indiana stopped collecting dues from unionized public employees; in 2011, there are 90% fewer dues-paying members.

In Utah, the end of automatic dues deductions for political activities in 2001 caused teachers’ payments to fall 90%. After a similar law passed in 1992 in Washington state, the percentage of teachers making such contributions declined from 82 to 11.

Democrats furiously oppose Walker because public employees unions are transmission belts, conveying money to the Democratic Party. (emphasis added) Last year, $11.2 million in union dues was withheld from paychecks of Wisconsin’s executive branch employees and $2.6 million from paychecks at the university across the lake.

Having spent improvidently on the recall elections, the Wisconsin Education Association Council, the teachers union, is firing 40% of its staff.

It’s fair to ask why the majority of employees who are represented by labor unions in the US work for the government. And it’s also very important to note that the government unions influence elections for the politicians who vote for their salaries. Isn’t that a monumental conflict of interest?

It is time that we brought things back into balance and this would be the single most important piece of legislation to reign in corruption in the ranks of unions that represent government workers.
The inability to offer legal bribes to encourage legislators and government bureaucrats to increase pay and benefits would mean that collective bargaining would return to a balanced process.
Don’t look for those sorts of laws to originate from an political body that is composed primarily of Democrats. It would hurt their pocket book.