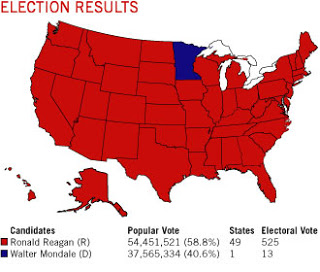 1984 Electoral Map (Reagan vs Mondale)
The liberal media sees a potential parallel between 1980 and 2012 as Governor Rick Perry surges ahead of the Republican pack of potential presidential candidates.
I don’t know who the Republican Party will choose to run against Barack Obama, but at the moment, Governor Perry has emerged as the largest threat to two groups: (1) The Democratic Party and by extension, the mainstream media, (2) RINOs, which include the Republican consultant class (including Carl Rove). Because Perry isn’t their constituent.

The mainstream media are working long hours to mount campaigns against Governor Perry, who has replaced Mitt Romney as the poster child (and target) for their angst. The parallels between Reagan and Carter are simply unnerving to them.
Perry is a conservative. He’s a close personal friend of rock musician Ted Nugent. For any of you who don’t know where Nugent stands on firearms ownership and a host of other conservative issues, I wonder where you’ve been for the last decade at least.
I’m going to tick off a few boxes on where Perry stands on some key issues:
To be fair to Romney, I’m not clear where he stands on some of these issues. That’s part of the problem. However, I know where Obama falls out on every one of these issues, and there couldn’t be a clearer distinction than the one between Obama and Perry.
Forbes came out with an article on Wednesday, August 24, speculating on who Perry might pick for a Vice Presidential running mate. You can read about Forbes’ speculation here. Not to be too big of a spoiler, they’re suggesting that Governor Chris Christie, Sen. Marco Rubio or Congressman Paul Ryan should be high on the list of potentials. 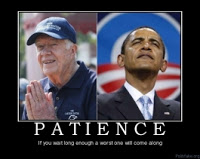 For Jimmy Carter, there has been some vindication in that it is possible to be a worse president than he was. Some of us who recall ‘the Carter Years’ never thought that we’d see it in our lifetimes, but we were proven wrong.