The US Nuclear Weapons Posture

Nuclear capable countries
The United States Nuclear Arsenal is aging. It’s time to make more bombs!
I know that’s not what President Barack Hussein Obama (our Dear Leader) wants to see. He feels that we should scrap a large percentage of our nuclear arsenal based on comments made this week. It is folly to do that.
Rather than simply parrot other more qualified people than myself, I refer you to the Federation of American Scientists and the US Defense Science Board (CLICK HERE). I’ll summarize their recommendations.

1. Leaders should declare “unequivocally and frequently” that nukes are still needed.
2. Establish a Red Team to look for nuclear enemies.
3. Establish a Deterrence Team to figure out how to better deter current and future adversaries.
4. The missile defense under construction is inadequate to deal with countermeasures and needs to be upgraded.
5. Accelerate development of “a credible Nuclear Leg of the Strike Triad.”
6. Figure out what to do with nuclear forces beyond the SORT treaty, but hedge (it is now called “remain reversible”) against negative developments in Russian and China.
7. Modernize the command and control system.
8. The Nuclear Weapons Council should establish a policy that no single warhead type makes up more than 20 percent of the deployed stockpile (i.e., the stockpile should consist of at least five different warhead types).
9. RRW-1, as the first Reliable Replacement Warhead prototype is called, should be a full weapons program.

Recommendations for the nuclear weapons production complex include: 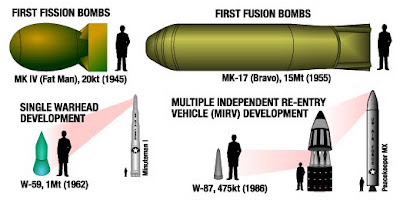 To those liberals who think I’ve slipped a cog on my wheel by suggesting that we modernize our nuclear weapons, I am not necessarily suggesting that we make more weapons. I am suggesting that we institute a program to construct Reliable Replacement Warheads (RRW’s). We have treaties with the Russians on absolute number of warheads allowable and I think we’re fine with that amount. Many of them are smaller warheads (theater nuclear weapons) used for nuclear demolitions (the so-called suitcase/backpack weapons), nuclear artillery rounds and so forth. Hydrogen bombs have a shelf life. The tritium in the weapons needs to be refreshed and serviced on a periodic (classified) basis. We can extend the life of existing nuclear weapons through a program of modernization.
The current president of the United States does not have America’s best interests at heart. His agenda and that of his closest advisor remains suspect in the minds of many Americans. It’s not that I have personal rancor toward Dear Leader, however, his nuclear disarmament motives are suspect. I won’t outline those motives here because they have been clearly outlined elsewhere on this blog.