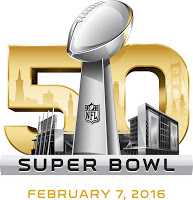 Yes, there will be a Super Bowl party at my house tomorrow. The family is sharply divided between Denver Broncos fans and Carolina Panthers fans. It’s much like the War of Northern Aggression (also called the American Civil War) where families were divided. Griffin (age 7) favors the Panthers, as do I. His father (age 34) favors the Broncos.
The house will be filled with various and sundry people with differing opinions on how the game should be played. They will be eating hamburgers and hot dogs and offering unwanted advice to both players and coaching staff from their chairs or positions on the three sofas in the TV/family room.  I’m guessing that we will have at least twenty people/kids running around and the local police car  and the sergeant that supervises our side of town will stop by on their Code 7/lunch break for a hamburger and to inject more unwanted advice, backed up by the full force of law.
Bloggers are welcome to swing by and add to the mayhem if you RSVP (but you may also end up in handcuffs, spending a night at the gray bar motel if you are disorderly – or back the ‘wrong’ team).
THE  HEART  OF  THE  MATTER
I realize that America in 2016 confronts a lot of problems. We can throw around blame but most of it rests with irresponsibility in high places. Campaign 2016 should focus on one thing in my mind and the rest will follow. This is the question that I have of all candidates:
HOW do you plan to do to deal with the $19 trillion dollar debt that Barack and friends have saddled the country with? Be specific.

My next question is similar to the first. 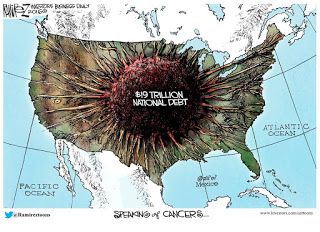 Will you pledge to legitimately balance the budget? When I say “legitimately”, there are a number of budget games that can be played to make a budget look balanced when it’s not. The only way to deal with the national budget is to deal with entitlements. We know from the fluff up in Iowa that the farmers there were all for conservative values so long as the candidates vowed to allow them to keep their ethanol subsidies (which passes for free cheese and ObamaPhones in DeMoines).
The military industrial complex provides ‘welfare for the middle class’, but  growing the military is not viable until the debt issue has been resolved. Shrinking the non-military portion of the federal government is one way to begin to deal with debt, but none of the “conservative” candidates have discussed how they plan to do that. If a Republican candidate is elected, they will have a Republican Congress. What do they plan to do with that mandate (not unlike the mandate that Barack inherited)? At present I am underwhelmed with what the Republican controlled Congress has been able to do.
FIREWORKS

The Democratic Party’s dilemma with the impending case against candidate Clinton becoming an issue is their worst nightmare. The anointed queen of the nation charged by DOJ as the result of an FBI investigation, and the only player left on the field is Bernie Sanders, a communist, whose stated economic policy is to spend in such a way as to leave us with a $30 trillion debt in four years.
Hillary Clinton is willing to flip/flop on any given issue to get elected. When you look at her record, it’s so all over the board that I frankly don’t know where she stands on any issue, because in much the same way as her husband, Slick Willy, the’s for and against everything so long as it puts money in her pocket and power in her fat little fist. But none of that matters as she tromps through New Hampshire flanked by her army of advisors, sycophants and food tasters.
The FBI (150 special agents on the case now at last report) has the sort of case against her that prosecutors dream of. The elements of the crimes are simple and the US State Department (Home of Hillary) in a Democratic administration, are providing them the ammunition, and will testify. DOJ convened an investigatory grand jury when this case started as is pro forma. An accusatory grand jury will be convened when it’s time to seek an indictment.
And then what is the Party to do?
Pass the popcorn, please. It will be like another Super Bowl Party!!