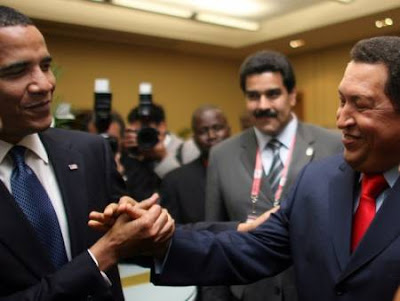 President Barack Hussein Obama promised to reach out to our enemies and to embrace them as friends. It was one campaign promise he made good. The president has a talent for embracing third world potentates and petty dictators. Chavez may be the very worst of the coterie of fans who have pandered to the narcissistic American. 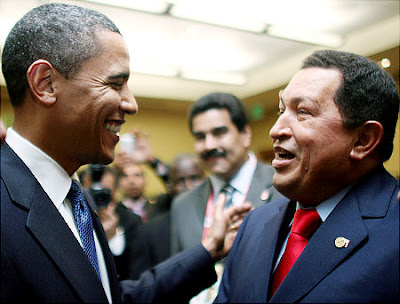 Chavez bullied a referendum through on February 15, 2009 which means he can be “president for life”. It’s a goal that his good friend Barack Hussein Obama aspires to but it may not work out the same for Obama. Chaves said that he “needs another ten years in office for Venezuela’s socialist revolution to take root properly.” (Time) At present, Venezuela’s ambitions are not imperialistic, however since Russia is now their principal military supplier and they are arming for war, it may only be a matter of time before they start finding reasons to expand their borders at their neighbors expense – and for the sake of spreading their brand of national socialism throughout South America.

Where will the US be in all this? Are we now an ally of Venezuela in Chavez’s vision of an expanded and “enlarged” nation? The US contained Castro – Obama seems content to get into bed with Chavez.

The British seem to love him as much as Obama does. (video above)
Personally I think the US should assist in regime change in Venezuela with extreme prejudice but we need to wait for another president to make that dream a reality.