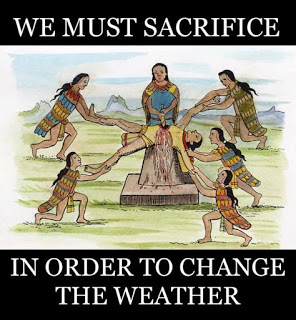 
Today I thought that it might be interesting to revisit global warming, and cooling, and climate change in a way that the staff at Virtual Mirage does. We live on a remarkable planet. It’s our home and it will be the only home that we who are alive now will ever know, flying saucers notwithstanding. (traditionally if they take people away and ‘probe’ them, they also return them)

Politicians in the US and Europe feel as if they can change the weather if only taxes were high enough (please ignore the fact that China, India and Indonesia are responsible for most of the pollution on the planet today). Many human lemmings want to follow those climate activists into the sea.

Some of AOC’s followers think that it’s time to start eating babies to help save the planet. Read about the town hall meeting at Legal Insurrection.

“We are not going to be here for much long because of the climate crisis,” the woman said as she appeared to have an accent. “We only have a few months left!”

“I love that you support the Green Deal, but it’s not getting rid of fossil fuel, it’s not going to solve the problem fast enough,” the woman continued. “A Swedish professor [said] we can eat dead people but that’s not fast enough. So I think your next campaign slogan has to be this: ‘We got to start eating babies! We don’t have enough time! There is too much CO2.”

That would be a great next step for the Democrat Party as they move into the next election cycle. Imagine the slogan, “EAT YOUR CHILDREN to save the planet. There are only a few months left before we all die.”

A Tree Falls in the Forest

(link) An ancient tree that contains a record of a reversal of Earth’s magnetic field has been discovered in New Zealand. The tree—an Agathis australis, better known as its Māori name kauri—was found in Ngawha, on New Zealand’s North Island, during excavation work for the expansion of a geothermal power plant. 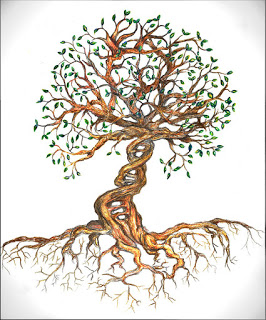 The tree, which had been buried in 26 feet of soil, measures eight feet in diameter and 65 feet in length. Carbon dating revealed it lived for 1,500 years, between 41,000 and 42,500 years ago.
“There’s nothing like this anywhere in the world,” Alan Hogg, from New Zealand’s University of Waikato, told the website. “This Ngāwhā kauri is unique.”
The lifespan of the kauri tree covers a point in Earth’s history when the magnetic field almost reversed. At this time, the magnetic north and south went on an excursion but did not quite complete a full reversal.
Earth’s magnetic field is thought to be generated by the iron in the planet’s core. As it moves around, it produces electric currents that extend far into space. The magnetic field acts as a barrier, protecting Earth from the solar wind. This is a stream of charged particles from the Sun that could strip away the ozone layer if it were to impact the atmosphere.
When the magnetic field reverses—or attempts to—it gets weaker, leading to more radiation from the Sun getting through. Previously, scientists have linked extinction events to magnetic field reversals. Funny, but there was no man-generated climate influence when the tree died. Riddle me that.

There have been three late season white tail deer fawns born near the White Wolf Mine recently. One arrived about a month ago and we’ve had twins delivered within this past week. I’ve included photos. 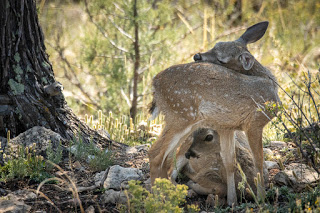 Sometimes when you read the tea leaves or cast the runes, you can infer things. Late season fawn births, hmmm, perhaps a portent of a warm and globally warming winter is ahead, despite the early snow fall (on the order of 4′) in the Pacific Northwest.

Or maybe nature is playing a trick on all of us and the fawns will die in a cold and cruel winter, leaving bones that will turn into fossils and will be discovered by science in a million years.
Augury by these future scientists will be as spotty as the fawns because they will be torn in their opinions. Were these babes in the woods killed by the people who lived in the ruins of the White Wolf Mine? 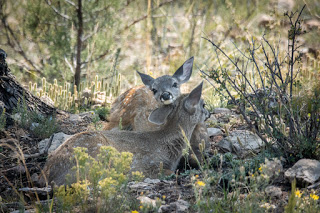 And that’s my point. Nature is just unpredictable enough to be interesting. Nietzsche said that “when you look into the abyss, the abyss also looks back into you.” While I am completely opposed to pollution and destroying nature and our environment, the complex movements of the planets core and the Sun is presently beyond mankind’s complete comprehension. Keep your tax money, clean up around you. The People’s Republic of China will continue to pollute and act — the way that they act. The only thing that seems to be causing them concern these days is Donald J. Trump. And the climate people hate the president…go figure.

Jules, mother of wolves – Socrates got that right.
Talking of philosophy… those photographs are stunning. You should sit by that lake and write. Now you just need a wolf to come from behind the trees in the dawn mist.

Wolves are difficult to predict. There are not THAT many of them here in the area and they tend to stay local to their territory and raise pups. There are enough elk and buffalo to keep them fed. For the most part, they’re running north of me about 75 miles.

Jim suggests – …Rather than the Caribbean, put the resurrected dinosaurs on an island off the coast of Asia. If something goes wrong, the Japanese have a lot of experience dealing with that sort of thing.