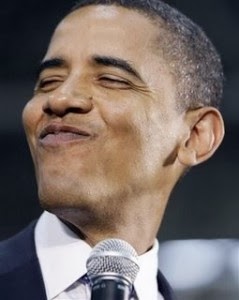 Iran will have a nuclear bomb soon if it doesn’t have one already. Within the year it will have more than one and then it will test it somewhere to prove to the world that it has one that works. There’s not much that can stop it now. I can’t help but wonder about the personal pay-off to Barack Obama is (pictured right). Perhaps that’s the cynic in me.* The Obama White House has been blatantly for sale since the Nobel Laureate took office – in similitude of Chicago, the rock that he crawled out from under.

*“The power of accurate observation is commonly called cynicism by those who have not got it.” – George Bernard Shaw

It will be left to future US Presidents and world leaders to deal with the emboldened nuclear Iran. Israel needs to beef up its counterpunch in terms of its own nuclear weapons mounted on intermediate range ballistic missiles. The Saudis are buying theirs from the Pakistanis, who got them from the Chinese.  And suddenly the world just got a lot more dangerous.