An Opportunity for Japan 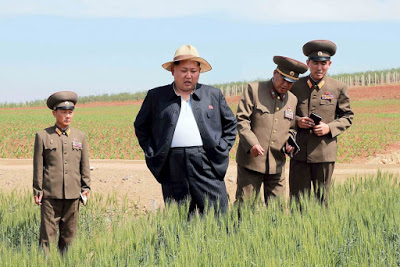 Facebook
Twitter
Pinterest
WhatsApp
The (peace loving) Democratic People’s Republic of Korea (DPRK), or North Korea, has been warming up its launch sites for another ballistic missile test to try and get attention that the last underground nuclear test didn’t seem to garner. They claimed that they tested a thermonuclear weapon (hydrogen bomb), but nobody believes it. It’s that sort of disrespect that drives Dear Leader nuts. But he’s crazy as a shit house rat, so crazier than that means that he needs to launch a missile somewhere, at something. Any direction will do except toward China since the other worker’s paradise pays their bills and feeds their starving people. (Dear Leader exempts himself from starving)

Every time the DPRK wants the world to pay attention to them, they go through this process to remind people that they’re still around and are still willing to stir up trouble. It’s what they do.

But it may be different this time because the Japanese want to try out their new American anti ballistic missiles.  The Americans would like to see the real-world test of the system as well. The Japanese are tired of taking crap from their North Korean neighbors. I sense a convergence of interests.

Japanese Defense Minister Gen Nakatani said on 3 February that he had ordered the Self-Defense Forces to intercept a North Korean ballistic missile if necessary. Nakatani said arrangements are currently being made to deploy the Patriot Advanced Capability-3, or PAC-3, surface-to-air missile systems in Okinawa Prefecture, over which North Korea’s ballistic missile might fly. PAC-3 systems will likely be deployed on Miyakojima and Ishigakijima.

The Japanese Maritime Self Defense Force also has destroyers equipped with Standard Missiles capable of shooting down a North Korean ballistic missile if it’s launched into the Sea of Japan. The question for the Japanese is whether the Navy or the Air Force will be able to paint the silhouette of  a North Korean missile on the side of something. The competition is intense.

“It — the ‘satellite’ launch — actually means a ballistic missile launch,” Abe said during a meeting of the House of Representatives Budget Committee. “Following a nuclear test, it clearly violates UN Security Council resolutions and is a grave provocation to our country’s security.”

The Japanese are serious about shooting down a rocket or missile if it violates Japanese airspace over a major island. The deployment of PAC-3 anti-missile systems on Miyako or Ishigaki islands would indicate Japan might try to down the missile for violating the airspace of even the smaller islands. Prime Minister Abe at least has given himself and the Self-Defense Forces that option.

It would be good practice for the PAC-3 teams, but the country would need to be prepared for North Korean retaliation. Civil defense measures would be ordered in both countries.

The information about a missile launch from a mobile missile launcher is very early and has not confirmed by separate sources. North Korea has the capability to test military missiles off the east coast during the launch window for the space launch off the west coast. Such a diversion would stretch and test US and Allied missile detection and destruction capabilities.