Russian Interests in the Middle East 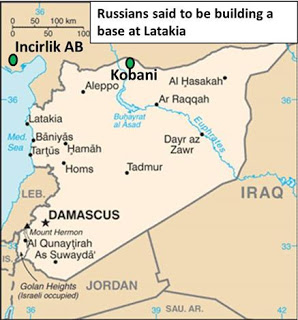 For the past week, news outlets reported the Russians were reportedly building a base near Latakia Syria. They reportedly brought in prefabricated housing for additional personnel; a portable air traffic control station and some new armored personnel carriers. These items appear to be preparations for a Russian air force presence at Latakia.
The commentaries focused on Russian buildups of men and equipment and neglected the creation of another Russian facility in Syria. The location of a facility at Latakia would enable the Russians to monitor and advise the Syrians about US air operations from Incirlik and, if necessary, defend Syrian government forces from a US air attack.
Latakia can also be defended from air attacks by Russian naval assets in the Eastern Mediterranean…and if things go badly, the Russians can also evacuate Latakia by sea without a lengthy and dangerous overland route that could be cut off.

A Russian air facility at Latakia is intended to respond to the increase in US air operations over Syria from Turkey. It also could help defend the Alawite homeland around Latakia from opposition attacks.

For the past month, news services have reported that France is negotiating to sell Egypt two Mistral-class amphibious assault ships. These are the same two ships that France refused to sell to Russia after it accepted Crimea’s application to join the Russian federation.
Saudi Arabia and the United Arab Emirates (UAE) also are interested in purchasing one or both ships so it may come down to a bidding war.
The Mistral can also carry the new F-35C vertical take-off aircraft that the US plans to sell to both the Saudis and the UAE, thus making it an aircraft carrier capable of launching and recovering stealth-type fighter/bombers.
The Russians will assist Egypt with financing and training, provided Egypt agrees to buy Russian helicopters for the ships.
The UAE said the Mistral-class ships are a neat fit for the type of armored strike forces that the UAE has developed and has deployed in Yemen.
The unifying theme in an Arab state purchase of the Mistrals, which appears likely, is to counter-Iran. Saudi Arabia, Egypt and the UAE are expanding their military forces for Iran’s eventual breakout and bid for regional leadership. The Iran nuclear program of action already has sparked an arms buildup. American weakness has emboldened Iran.
UAE, Saudi Arabia and Egypt are all intent on buying nuclear weapons on the open market for their own use against an emboldened and aggressive nuclear Iran. It is presently unclear whether or not the Russians will sell off some of their large inventory for hard cash.
____________
On 8 September, Bulgarian officials confirmed that on the night of 7 September that they refused to grant overflight permission for Russian transport aircraft flying to Syria. Last week, the US asked Bulgaria and Greece –NATO members — to deny the Russians overflight permission. That’s a very large issue, and the Russians will retaliate.
The lack of a permanent US fleet in the Mediterranean is creating more problems as we try to counter Russian moves in the Eastern Med. The Obama Administration calculated wrong AGAIN when it decided to disband the Sixth Fleet. The old adage that you can buy guns or butter (welfare) but it’s difficult to buy both comes into play. Navies can not spring into existence. They are expensive and they take a long time to build.