(JPL) They’re a fascinating pair: Two icy worlds, spinning around their common center of gravity like a pair of figure skaters clasping hands. Scientists believe they were shaped by a cosmic collision billions of years ago, and yet, in many ways, they seem more like strangers than siblings.

A high-contrast array of bright and dark features covers Pluto’s surface, while on Charon, only a dark polar region interrupts a generally more uniform light gray terrain. The reddish materials that color Pluto are absent on Charon. Pluto has a significant atmosphere; Charon does not. On Pluto, exotic ices like frozen nitrogen, methane, and carbon monoxide have been found, while Charon’s surface is made of frozen water and ammonia compounds. The interior of Pluto is mostly rock, while Charon contains equal measures of rock and water ice. 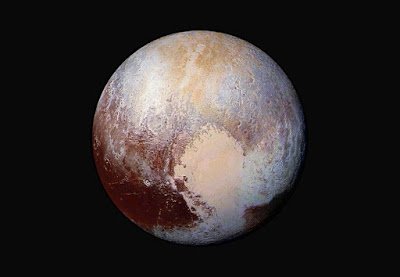