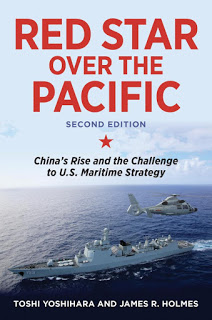 Context and Precedence: While post-Soviet Russia’s navy declines in capacity (retaining key lethality in nuclear deterrence), China’s navy has been transformed from a coastal defense force into a blue water naval presence capable of projecting its influence over all of Asia, the Western Pacific and the Indian Ocean. Red Star Over the Pacific – Second Edition, provides readers an up to date view of the expanded capacity of the People’s Republic of China’s Army’s Navy, its capacity, its philosophy, and its view as hegemon of Asian waters – extending to Africa.
Naval Institute Press
About the Book:  This book is a follow-on to the first edition and as Chinese naval doctrine and its fleet changes and grows there will likely be a third edition. Toshi Yoshihara and James R. Holmes have become go-to experts on the subject and are able to provide unclassified information in a readable format that makes the book worth reading.
The book relates how the Chinese continue to be close students of Alfred Thayer Mahan. Mahan (September 27, 1840 – December 1, 1914) was a United States naval officer and historian, whom John Keegan called “the most important American strategist of the nineteenth century.” Expanding on Keegan’s assessment, the Chinese are making him the most important naval strategist in the modern era. The Imperial Japanese Navy, it is said, read Mahan closely, and used his philosophy to underpin their attack on Pearl Harbor, December 7, 1941 (more here). If you want to know how the Chinese are approaching their naval expansion from a philosophical perspective, you’d best read up on Alfred Thayer Mahan’s key dissertations. Red Star Over the Pacific returns to Mahan’s philosophy again and again, first in chapter three, Strategic Geography of Chinese Seapower (chapter heading), with a discussion of choke points and containment.

The First Island Chain:
From a geographical perspective, the Chinese view their construction to defeat island chain and establish sovereign control over the South China Sea to also be a metaphorical barrier to the West.

“We contend that the archipelagic concept casts a long shadow over Chinese strategic thought. It shapes how Chinese leadership perceive threats and in turn informs how they think about strategic operational requirements for maritime defense. To them the island chain constitutes not just a physical barrier but a metaphor…” (pp 70-71)

This was the first US Navy transit within 12 nm of these two islets since the Chinese expanded national borders to include them, hundreds of miles from Chinese shores (about 800 miles in the case of Johnson South Reef).

The image (below) of Johnson South Reef is a year old. I included it in this item because it is one of clearest that shows the extent of Chinese investment in the seven man-made islets it has reclaimed and occupied.

The Second Island Chain that China sees constraining their expansion to be anchored by Guam. Reading the book will help you appreciate and understand the Chinese view of naval expansion in the Pacific.

The book brings Mahan’s strategic thought back full circle in chapter eight with a discussion of US maritime strategy for Asia, citing the “Cooperative Strategy for 21st Century Seapower” (2015) and how it differed from its previous editions.

I recommend reading the book, Red Star Over the Pacific to obtain a better and more balanced view of where China is, and where they plan to be as they expand sea lane control (to the extent that it is needed) to insure their supply of raw materials and to support their Belt Road Initiative through Asia and Africa.