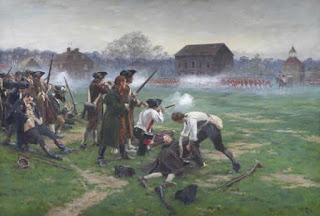 Facebook
Twitter
Pinterest
WhatsApp
About a month from now, we will be celebrating the 244th anniversary of the day that the British government in North America decided to seize arms at Concord, Massachusetts. Along the way, they met citizens who stood on Lexington Green. (LINK) The British had an open road to Concord, but it was a little different on their way back. For the colonists, 49 were killed, 39 were wounded, and five were missing. For the British, 73 were killed, 174 were wounded, and 26 were missing. While that may sound indecisive, farmers were fighting elite British formations including British Marines – the finest army in the world.

And the British lost most of the continent. (The Canadians hung in there)

It’s tough to stuff the genie back into the bottle once you start to seize the firearms of a free people. The principle difference between free people and slaves is their capacity to bare arms to protect themselves, their property and as a hedge against tyranny.
On April 19, 1775, the tipping point was reached. It should have been an easy victory. All of the cards were stacked in favor of the British, who had a large, professional, army and an unbeatable navy.
But things didn’t work out the way that the government planned, did they?

It’s a historical lesson that is lost on the progs today who feel that it should be easy to deprive honest citizens of their rights – while criminals do what criminals do. The British made criminals of patriots, but it didn’t last. Those same persecuted patriots ended up running the nation.