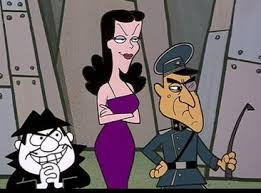 Facebook
Twitter
Pinterest
WhatsApp
2 million
I rarely check blog stats but I did today
and this obscure blog has over two million
page views. Thank you for taking time out of
your lives to drop by.

Clearly it will involve Boris, Natasha and Fearless Leader.

The only way to thwart their evil plot to conquer America is to require voter ID and demand that people appear personally at each voting place.
It might not stop the dead from voting in Chicago because it’s a tradition there, but most of the damage can be averted…if the Democrats are interested in stopping Russian meddling.
Victor Davis Hanson has a good piece. It’s short, worth a read, “Just How Far will the Left Go?” 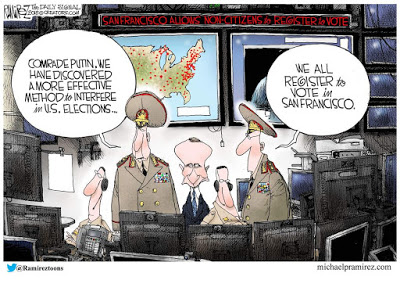 How Low will they Go?

Is former CIA Director John Brennan cashing in with the corrupt, lying, smug, scamming, elite mainstream media by trashing President Trump? That much is undeniable. CNN pays Brennan to go on its shows and lie about the President. Same with Big Jim Comey, now a Democrat Party insider. They’re paid millions to keep the ratings up in the failing networks, and we all know the business of media is in the ratings.
What is John Brennan’s access to CURRENT intelligence? Getting the information requires two things: (a) clearance and (b) access. My sense is that while Brennan and other former DCI’s have clearance, their access to current information is very limited. They’re still allowed in the CIA HQ, can go to the executive cafeteria and have lunch and hang out (clearance), but that’s about it.
Bottom Line: John Brennan accused President Trump of being a traitor. It’s one of if not the only federal crime punishable by death. In exchange, Rand Paul is asking that Brennan’s ticket to the 7th floor at CIA be canceled.
Personal Note: I’ve met John Brennan and Jim Clapper. Brennan is a consummate stuffed shirt with a personal love of Islam, which explains his appeal to President Obama.
General Clapper is a 77 year old retired Air Force Lt. General. Clapper isn’t as cunning as Brennan but he knows the Pentagon game and made his living doing insider fighting in the heart of the largest and best funded Byzantine Empire  (the Pentagon) the world has ever known. While General Clapper has proven to be a bit of a cur, lying to Congress about NSA spying activities on US Citizens, I can’t help but admit that I still like him – sorta. In much the same way that I like a cobra in a zoo that is behind safety glass. Brennan, on the other hand has all the endearment of a New Orleans wharf rat.