Recommendations for Australia (nobody asked for them) 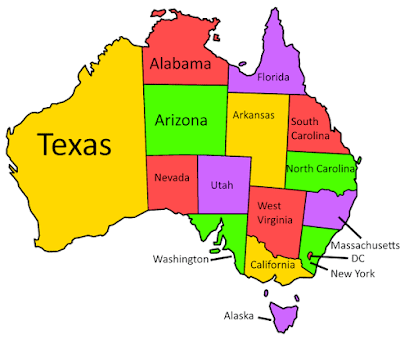 The map, left is marked for comedic effect to compare it to American states in climate. Some say that it’s generally accurate.
All the coastal regions that aren’t desert meets ocean are used for agriculture and mining so between the lack of land that can be built on and the land needed for other purposes Australia finds itself without a lot of commercially useful land.
Aussies will proudly point out that they produced 22 million tons of wheat, 2.1 million tons of beef and 0.5 million tons of carrots last year. Australia is also rich in mineral wealth and mining is big business for Australian companies both in Australia and elsewhere. But as we are now learning, most of its raw materials have gone to China and with the outbreak of the plague (2019-n-CoV, or Wuhan Virus), exports are off and the currency is taking a serious beating. Australia has tied itself to China in a way that has proved to be unhealthy. Instead of embracing industrialization as an ALTERNATIVE to China, it’s gone another way.
Australia doesn’t have to be an isolated spot on the planet, struggling to export goods and being forced to import because its capacity for production is currently challenged.
Enterprise zones may be the answer, but the real solution is a change of culture, and love of capitalism – and a reduction in socialism and the trend toward income redistribution.  You can’t have wealth creation in a a meaningful way while trying to create socialist environment.
If everyone is entitled to the labors of others, the others will either move or will not be motivated to do the work that is necessary to pull Australia out of its current (dismal) situation.