Buttigieg and US Intelligence 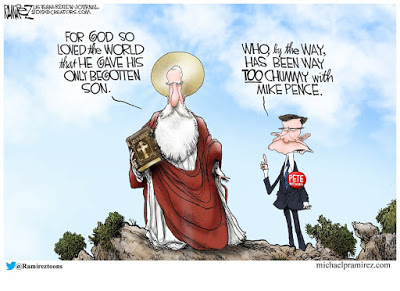 Facebook
Twitter
Pinterest
WhatsApp
It doesn’t really matter how you feel about the mayor of South Bend, Indiana. The question is what sort of relationship he’s had with US Intelligence Agencies and to what extent it counts in the current primary season.
Alex from ammo.com offers this perspective on Mayor Pete’s background.

Having rubbed shoulders with elements of various alphabet agencies all of my adult life, and that extends to my immediate family – my children primarily, I may be able to offer some insight. The kids grew up around SEALs, spies, some few recruited assets, mercenaries and so forth. They know the difference between an ‘agent’ and a ‘case officer’, and it’s useful to make that distinction because calling Mayor Pete (Butt Guy) Buttigieg an “asset”, is to call him an “agent”, and he clearly isn’t. There are specific legal requirements for an agent, or asset to be that. Lest you want to quibble, those are important requirements.
Based on my best guess, I suspect that during his service in the US Navy as a reserve intelligence officer (deployed) that he rubbed shoulders with employees of various intelligence services of the US Government. It would be surprising if he didn’t. He’s a personable guy, and we know that he likes guys – a lot, and he’s outwardly charming enough to become a politician. One may argue the extent to which he has been successful, but he’s currently leading the Democrat Party’s field in terms of delegates to the national convention. Many including me believe that he will fade, but that’s where he is now.
In the off chance that Mayor Pete will become President Buttigieg and his darling husband will become first man, various and sundry people he’s met in his journey through the Byzantine world of American intelligence, have endorsed him. They all have a motive in doing do. There is no down-side for them, and a considerable up-side if he wins.
I guarantee you that corrupt, sleepy, creepy, old, Slow Joe Biden knows a lot more people in the intelligence community than Mayor Pete does, having been a senator for 200 years and vice president for 8. Did that propel him beyond fifth place in the New Hampshire Primary? Not hardly.
So what does Pete’s rubbing shoulders with people he worked with as a deployed reserve naval intelligence officer have to do with his candidacy? Nothing significant. If he becomes president, he may end up rewarding people who endorsed him (as they would hope) by giving them better positions in government. That’s sort of how the patronage game works.