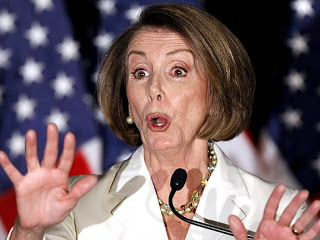 Rep. Nancy (Nasty) Pelosi (D-CA) voted to place Judge Neil Gorsuch on the 10th Circuit Court of Appeals a decade ago. Today she characterizes him in a different way. On CNN she said that Judge Gorsuch is the corrupt pawn of corporate America and the rich; that he has come out against “clean air, clean water, food safety, safety in medicine, sides with felons on issues of gun safety and is hostile toward children with autism.”
I find it odd that she didn’t accuse him of being a racist, a misogynist, a xenophobe or an Islamophobe. It must mean that she still thinks that he’d be a good Supreme Court Justice…or… Pelosi is slipping. I hate to suggest that she is getting senile and may need to have her face stretched — again.
Keep in mind that the Pelosi attributed the catastrophic loss that he Party suffered in November to the corrupt, elite, smug, progressive mainstream media not getting the Democrat message out. She’s the wealthiest member of the House of Representatives…but I’m sure that wealth wasn’t accumulated only as a result of her government paycheck. I’m stopping short of calling the House Minority Leader corrupt. I leave it for you the reader to make that leap all on your own.