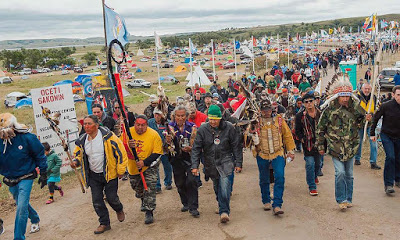 The Dakota access pipeline, which does not cross Sioux land, has been a touchstone for “hippies” who showed up to join the Indians in protesting. President Donald Trump on Jan. 24 — just four days after he took office — signed an executive action telling the Corps to quickly reconsider the Dec. 4 decision. Many of the protesters have gone because of bitter cold winter weather.

The Acting Secretary of the Army has directed the Army Corps of Engineers to proceed with an easement necessary to complete the Dakota Access pipeline.

President Trump projected that both Keystone and Dakota Access projects will generate on the order of 40,000 well-paid jobs. He also required that the pipelines be constructed of American steel.

The crossing under Lake Oahe, a wide section of the Missouri River in southern North Dakota, is the final big chunk of work on the four-state, $3.8 billion pipeline to carry North Dakota oil through South Dakota and Iowa to Illinois. President Donald Trump on Jan. 24 called on the Army Corps of Engineers to reconsider its December decision to withhold permission until more study is done on the crossing.
The move is likely to be challenged in court by the Standing Rock Sioux, who have spent months protesting the project along with supporters from around the country. The tribe gets drinking water from the river and worries a pipeline leak would pollute the water. The developer, Texas-based Energy Transfer Partners, says the pipeline is safe.

Over 400 pipelines currently cross under the Missouri and Mississippi Rivers and there are not leak issues with those pipeline crossings. The Sioux complaint is a red herring.

Hundreds and at times thousands of pipeline opponents who have dubbed themselves “water protectors” have camped on federal land near the crossing site since last August, often clashing with police and prompting more than 625 arrests. The camp’s population has thinned to fewer than 300 due to harsh winter weather and a plea by Standing Rock Chairman Dave Archambault for the camp to disband before the spring flooding season. Most of the protestors relieve themselves in shallow pits or on the open flood plain, and that effluent will be washed into Sioux drinking water with the spring floods.
Keystone XL Pipeline
President Trump also revived the controversial Keystone XL Pipeline. “We appreciate the President of the United States inviting us to re-apply for KXL,” TransCanada spokesman Terry Cunha said in a statement. “KXL creates thousands of well-paying construction jobs and would generate tens of millions of dollars in annual property taxes to counties along the route as well as more than $3 billion to the U.S. GDP,” Cunha added.

Barack opposed the pipeline because he thought that it would change the weather. However, Warren Buffet, one of Barack’s key financial backers, owns the railway rolling stock that is currently taking oil to market. It’s more expensive and less safe than using a pipeline — come on, Barack, tell us again why you oppose the pipeline.

President Trump supports projects that build infrastructure and create jobs. These pipelines do both. I guess that you could opine that President Trump likes to lay pipe…