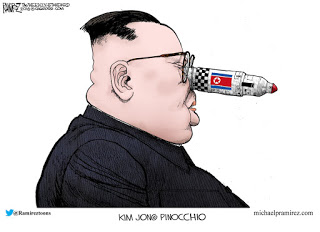 Facebook
Twitter
Pinterest
WhatsApp
Norks Visit Teheran
On 7 August, North Korean Foreign Minister Ri Yong Ho arrived in Tehran for talks with President Rouhani and Iranian Foreign Minister Mohammad Javad Zarif. Minister Ri is the first high ranking North Korean diplomat to visit Iran during President Rouhani’s second term. However, Ri’s visit does not signify a diplomatic breakout or a weakening of sanctions for either country. The US has sanctions on both, which they ignore between themselves.
The relationship is more than 30 years old and dates to before the Iran-Iraq war of 1980 -1988. North Korea sold Iran Scud ballistic missiles, a turnkey Scud assembly facility and rocket engines during that war. North Korea also constructed much of Iran’s rocket and missile infrastructure–test stands and launch facilities.
As Foreign Minister, Ri’s visit is not about arms sales or missile proliferation. Those issues are not included in the North Korean Foreign Minister’s portfolio. It is highly likely that Ri shared insights about dealing with the US administration.
Chairman Kim’s technique has been to use flattery and a personal relationship with the US President to separate the leader from his advisors to advance North Korean purposes. Kim’s techniques transformed the security situation on the Korean Peninsula from near war to rapprochement in six months.
The Iranian Supreme Leader has chosen defiance and demagoguery over skillful crisis management. Most importantly, Ayatollah Khamenei made the mistake of rejecting the US President’s offer of a meeting. They’re used to dealing with the cur-like Obama and his band of misfits. Presuming that President Trump and his team are nothing like the oafish Americans who were in power for eight years. Minister Ri might advise Minister Zarif to focus on the US President’s actions more than his style. The President Trump wants a deal with Iran much more than a confrontation.
Differing Agendas on the Same (general) Issue
On 6 August, North Korean media called on the US to remove sanctions in response to the goodwill gestures North Korea has made.

The Workers’ Party daily, Rodong Sinmun, published in an editorial, “There have been outrageous arguments coming out of the U.S. State Department that it won’t ease sanctions until denuclearization is completed, and reinforcing sanctions is a way to raise its negotiating power.”

“How could the sanctions, which were a stick the U.S. administration had brandished as part of its hostile policy against us, promote the two countries’ amity?”

The South China Morning Post reported the UN Security Council approved on 6 August a set of US-drafted guidelines for ensuring that tough sanctions on North Korea do not impede deliveries of humanitarian aid.

North Korea has become more aggressive in linking its actions to its expectations of sanctions relief. The US has tended to treat North Korea’s actions, such as starting work to dismantle a rocket engine test stand and in transferring remains from the Korean War, as unilateral gestures of good will that required no specific response.

As the North’s leaders have become more frustrated, they have become more assertive. They want the sanctions lifted and implicitly accuse the US of reneging on its commitments.
The UN’s new humanitarian aid guidelines show that the US understands the North Korean process, it refuses to operate according to Kim’s plan.
The disagreement is the result of the two countries applying entirely different approaches to the rapprochement.
Chairman Kim persists in pursuing his phased step-by-step approach. In that approach, Kim and his men are trying to tutor the US into cooperating by reciprocating for every gesture North Korea makes, however trivial or non-substantive.
The US uses a progress payment approach in which the US rewards North Korea when it takes an action that constitutes substantial performance. Until then, nothing changes.
North Korea considers a declaration that the war has ended a condition for creating an atmosphere of peace that is conducive to substantive performance on other issues. Easing of sanctions is a key action for advancing the atmosphere of peace.
The US considers a peace treaty to be the last step in the process of denuclearization.

Iranian authorities suspended cell phone and internet service in some cities to prevent the spread of unrest. That seems to be the most extreme containment measure they have taken.
The protestors blame poor economic conditions on the regime. For the past 13 years, since 2005 when Ahmadi-nejad was elected president, Iranians have heard promises of less corruption, lower prices, more jobs and increased availability of goods. In 2013, Rouhani replaced Ahmadi-nejad and made similar campaign promises. Neither president delivered.
The protests have not yet evolved into an anti-government movement. They are disorganized and led locally. As a result, they do not threaten the regime at this time. However, some of the protestors have called for the ouster of the ruling clerisy. That is a sign that some protestors have concluded that the remedy for economic conditions includes political change. That view seems to be spreading.
The protests will spread when new, stricter US sanctions take effect. The regime’s inability to focus popular discontent against the US helps ensure that economic protestors will become political agitators.
Security conditions are likely to worsen. The theocracy, because it is convinced of its righteousness, will make few concessions to the people. As long as the Islamic Revolution Guards Corps (IRGC) remains loyal and responsive, the regime will survive.
Chinese Troops in Syria?
One reader of this blog asked me to comment on the Syrian media report last week of China’s willingness to help Syria in its push to retake the country.

Speaking to the Syrian pro-government daily Al-Watan, Ambassador Qi Qianjin expressed China’s support for what he referred to as Syria’s war against terrorists. Qi was asked about the possibility that his country would take part in the Syrian government’s upcoming campaign against the terrorists in Idlib, especially in light of the presence of Uighur fighters there.

Qi replied that “China ‘is following the situation in Syria, in particular after the victory in southern Syria, and its military is willing to participate in some way alongside the Syrian army that is fighting the terrorists in Idlib and in any other part of Syria,” according to Al-Watan.

President Xi Jinping appointed a special emissary for Syria two years ago, but China has essentially been on the sidelines of the civil war and the peace process. It backs Russian President Putin’s initiatives.
The Chinese reportedly have sent military training advisors to Syria since early 2016. Their primary mission is to track ethnic Uighurs from western China who have fought for the Islamic State. Their secondary mission would be collecting information on tactics and techniques for fighting Islamist terrorists. The third mission would be training Syrian soldiers. Beyond those missions, the Chinese would and probably could not provide military advice. The Russians have that role and responsibility.
The People’s Liberation Army has no direct experience fighting the kinds of counter-terrorism actions in which the US has been engaged in the past 17 years. Its training teams would be learning and gathering intelligence as much as providing training. Chinese operatives are determined to track any Uighurs who might threaten to return to western China.
In terms of economic aid, Chinese President Xi Jinping has pledged Chinese support in rebuilding Syria, which is a potential target for the Belt and Road Initiative. The Chinese have used the past two years to position themselves to take advantage of Syrian reconstruction.

Sputnik reported that Iranian Foreign Ministry spokesman Bahram Qassemi said Iran might decrease its military presence in Syria and even leave altogether after the situation normalized and the fight against terrorism had brought significant results.
Qassemi added that Tehran would maintain its presence in Syria as long as the Syrian government wanted it to remain.
This is the first open source report that Iran might reconsider its position in Syria.This statement is a trial balloon to gauge international reaction. President Assad will not invite the Iranians to depart.