Our Next President? (Alvin Greene) 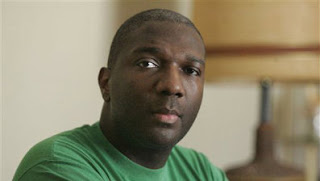 Facebook
Twitter
Pinterest
WhatsApp
Alvin Greene is the Democratic Candidate for the United States Senate from the State of South Carolina. He’s a lot like barack hussein obama, except it appears that he may well be a legitimate US Citizen – and the jury is still out on obama. Yes he looks like the movie character “Bubba” from Forrest Gump.

The Democrats aren’t all that proud of Greene since he’s an unemployed man who has been charged with a felony (conviction pending). I think that there may be some racism in the Democratic Party – trying to keep the black man down. Greene said, “The people of South Carolina have spoken!” He’ll remain in the race for the US Senate. The 32-year-old Greene, facing a felony charge for allegedly showing pornographic images to a college student last October, managed to capture 59 percent of the primary vote. He’s never been a community organizer, though, and perhaps the lack of that particular qualification may keep him from the White House in the shadow of barack hussein obama.

To Greene’s credit, he did serve with the US Army, however he did receive an ‘involuntary discharge’. So he has credentials that obama doesn’t have. He may have served poorly, but he served.

Greene’s improbable victory over Democratic candidate Vic Rawl, a former state legislator who officials expected would win, has unleashed a flood of questions, including how the unemployed Army veteran managed to pay $10,400 to get on the ballot before running a “low budget” campaign with no ads, website or fundraising.

Greene is an ardent supporter of barack hussein obama’s programs. He wants to create jobs through Department of Transportation projects, like widening and repairing major interstate highways in South Carolina. He supports the obama regime’s massive health care overhaul because “the best minds are behind it.”

U.S. House Majority Whip James Clyburn, D-S.C., called Greene a “plant” and has demanded an investigation into his candidacy. “There were some real shenanigans going on in the South Carolina primary,” Clyburn told the Bill Press radio show on Thursday. “I don’t know if he was a Republican plant. He was someone’s plant.” Oh come now, Congressman Clyburn – he’s your man! What you’re telling us is absurd as trying to pawn the failed buffoon barack hussein obama on the Republican/Independent community as one of ours.

The issue of felonious conduct:

Greene has been charged but NOT convicted. The South Carolina Board of Elections told FoxNews.com that it has no plans to investigate how Greene pulled off the upset, even though the South Carolina Democratic Party now wants him off the ballot because of a pending felony charge that he allegedly showed obscene Internet photos to Camille McCoy 19-year-old college student. McCoy said she told police that a man, whom she later identified as Greene, approached her last October in an on-campus computer lab at the University of South Carolina and showed her dozens of pornographic images from a computer.

“He just sat down next to me and asked if I liked football,” McCoy told FoxNews.com. “He then said ‘well look at my computer’ and it was porn.”McCoy said after she told Greene that the images were “offensive,” he said, “Let’s go back to your room.”

“Right now I am innocent,” Greene said. “The people of South Carolina have spoken. They’ve chosen me as their nominee and we have to be pro-South Carolina — not anti-Greene.”

Under South Carolina law, convicted felons are prohibited from holding state office, but they can serve in federal office — though the U.S. House or Senate can vote to expel or not seat him if he wins election in November.

Greene the “warrior”, the man of mystery:

Like his idol, barack hussein obama, Greene’s history is also little known. What do we know? He was discharged from the Army in August 2009 after being promoted to specialist. He signed up for the Army for a three-year stint in February 2007, and his discharge came six months short of his military obligation. Greene declined to elaborate in the interview above, saying, “Things weren’t working out … it’s a long story.” Greene, who was last stationed with the 1st Infantry Division at Fort Riley, Kan., served with the South Carolina Air National Guard from July 1995 to June 2002 and in the South Carolina Army National Guard from July 2006 to February 2007.

An issue of faith:

Nobody knows (or nobody asked) if Greene is a closet Muslim. If he changes his name (the way obama did from Barry Soetoro to barack hussein obama) and accepts Islam – he’ll be one step closer to the Oval Office.

If Democrats in South Carolina selected Greene to represent them in the US Senate, there is NO REASON why he can’t be their candidate to represent their Party in 2012 to replace the dangerous buffoon, barack hussein obama as US President!

ALVIN GREEN – Democratic Party Hopeful for the US Senate – and maybe for President.