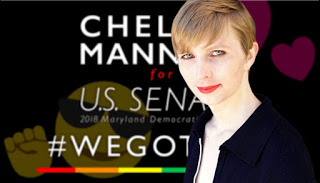 If Maryland Democrats don’t support the convicted national security felon and traitor, they’re transphobic. How could a Democrat in all conscience vote to return Senator Ben Cardin (D-MD) (an older white male) to the US Senate when they have a (technically white male – but) tranny option?
Who says that politics isn’t fun?
Is there anyone on the planet who thinks that Barack Obama would have pardoned Bradley Manning if he wasn’t a tranny? He’d be turning big rocks into little rocks at Leavenworth.

Naturally, Chelsea would be even more politically correct if he/it/she self-identified as a negro. I’m sure that’s coming.

Another Dose of Afrin?
News services reported on 16 January the movement of Turkish commando units to the Syrian border. Other military units moving to the border include a convoy of at least 40 armored vehicles and additional troops.

The BBC judged that the movements are related to reports that an operation into Kurdish-held Afrin is “imminent”. “Armored vehicles and commandos which were initially brought to Reyhanli and Hassa districts were then forwarded to the military units on the border,” NTV website said.
Hurriyet posted to its web site 21 images which showed military equipment, including tanks, and buses carrying soldiers to the region.
Military vehicles, including tanks and armed vehicles, were loaded on trucks and transferred to the border province of Hatay from the southeastern province of Sirnak, Hurriyet reported on 16 January.
“Hawk missiles stationed in the Kirikhan district of Hatay, near the border, were also directed towards Afrin, the newspaper had said.
President Erdogan has threatened the Afrin offensive so often it would be easy to dismiss his latest threat as more rhetorical posturing. Three events that were reported in the past 24 hours indicate attack preparations are in progress.
The first is the continuing reinforcement of the border the day after President Erdogan stated his latest threat. This is not necessarily diagnostic of Turkey’s specific intentions, but the buildup confirms Turkey’s general intentions and is necessary for an attack.
The more diagnostic indicator is the movement of troops from Sirnak to Hatay. This is a high cost, in-theater redeployment from the Iraqi border, almost the length of the Turkish border, to Hatay, which is on the Mediterranean Sea coast. It is not a routine move because forces experienced in fighting the Islamic State and the Turkish Kurds (PKK) are being shifted to a new operating area.
Finally, the statement that Hawk air defense missiles have been reoriented towards Afrin could be highly diagnostic, assuming it means that a part of the integrated air defense system has been refocused. The Hawks were oriented to defend against Russian aircraft.
The Kurds in Afrin are on their own. Two separate US military spokespersons told the press on 16 January that the US mandate to defeat the Islamic State does not extend to assisting the Syrian Kurds in Afrin Canton.
Press sources estimated that the Canton contains between 8,000 and 10,000 members of the Peoples’ Protection Units (YPG). The size of the Turkish and Turkish-backed proxy forces is not known
The two American disavowals look and sound like official US green lights for Turkey to do what it wants against Afrin. The timing of the announcements in the context of Turkey’s threats and force buildup support the inference that the Turkish government has decided to attack Afrin Canton soon. The Turks have reassurance that the US will not stand in the way.
Turkish uncertainty about the US reaction to a Turkish-directed operation against Afrin has been a significant deterrent. It explains President Erdogan’s many threats as probes to clarify US intentions. He now knows them.
A small Russian force went to Afrin last summer to deter Turkey from conducting offensive operations. We have received no update on the status of that monitoring unit. Russia has made no comments on Erdogan’s threats. We judge the Turks would not continue openly redeploying forces if the leadership lacked Russian assurances of non-intervention.