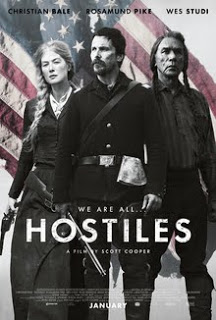 Facebook
Twitter
Pinterest
WhatsApp
This is brief commentary and a cautionary movie review.
Movie attendance is at a 24 year low. Hollywood films oooooze political correctness and nowhere is this more apparent than with the feature film, Hostiles. It would be nice if SOME  SMALL EFFORT was put into historical research before Hollywood embarked on its block busters.
In order to make Hostiles even more politically correct, they manage to write in a negro soldier (The US Army was segregated in 1892) into the small band of US Army soldiers who are taking an old Indian from Texas (in Comanche territory) to Montana (a distance of 1568 miles). The old Indian is dying and the US Army wants to insure that he goes to the happy hunting grounds in a place of his choosing.

1568 miles through HOSTILE land, and who does the Army send? Two officers, an NCO, two troopers and a negro private (Buffalo Soldier). Do they have a wagon with supplies? No. They do have the pissed off, but dying Indian to care for. The political correctness gets even more correct because everyone hates the land, hates where they are and what they’re doing. They pick up people along the way including Rosamund Pike (yes, naturally a hot woman not a prairie hag).
Historically, sixteen years previously to the movie time period, the US Seventh Cavalry Regiment with 700 men were all but wiped out in Montana. Though many of the hostiles escaped into Canada, the land was not settled and six soldiers in the open, un-supplied with food and additional ammunition, with Indians still scalping and killing doesn’t make for a metric of success. And all this to take a dying Indian to his burial ground?
I can tell you what would happen. Once out of sight of the fort, the soldiers would have killed the old Indian, rolled him into a gully and put some cut brush on the carcass. Then they would have either taken the “big bounce” (deserted) which was common in that timeframe, or would have holed up somewhere for a week or two and would have returned with the sad news that the chief died prematurely. So sad.
Movie Rating on the LL scale, 1 out of a possible 10. Because the premise of the movie is completely STUPID. But it’s politically very correct.
Keep in mind that I am deplorable and now I’m possibly also hostile.