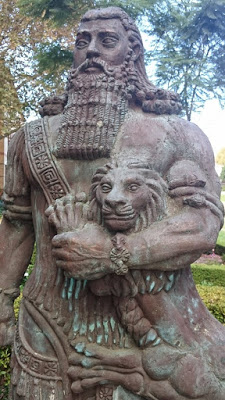 Facebook
Twitter
Pinterest
WhatsApp
So what is genuinely old and what is genuinely new?
There are books on the Epic story of Gilgamesh. Possibly the first epic written by man? (more HERE) Theories abound when it comes to interpretations (it mentions the Flood of Noah), but to me, it’s a reassurance that the difference between ancient peoples and us – with the intervening years – is very small.

The story follows Gilgamesh, a young and handsome Uruk. Gilgamesh was the son of Ninsun, a goddess, and Lugalbanda, a priest-king. Wanting for nothing, he grew up spoiled, arrogant and cruel. He spends his time beating the other men of Uruk in fights and taking many women to bed, including the wives of other men – as royalty and the son of a goddess, he feels he is entitled.

The people of Uruk, terrorized by Gilgamesh, and unable to do anything because of his royal and divine status, cry out to the king of heaven, Anu, to help them with the young king.
In response, the gods send Enkidu, a wild man who lives in the desert, to Uruk. Enkidu lives in the wilds, side by side with the animals when he encounters a priestess named Shamhat, who partially civilized him – she teaches him how to eat like a human being. Enkidu then heads to Uruk.

There, he meets Gilgamesh and challenges him to a fight. They fight day and night, but eventually Gilgamesh wins. However, in the process, he begins to learn humility and becomes best friends with Enkidu.

It’s a story of buddies, an epic of friendship.  We can understand it today because the same forces that impacted Gilgamesh and Enkidu impact all of us. We relate at a very deep level to their adventures. It’s not all that different than a modern hero (pick any of them).

There’s a general sense – and I am generalizing, that in the past, people were ignorant, believing in mystical, religious explanations of natural phenomena. That argument rests on the idea that people in the past were incapable of making rational, well thought out, scientific arguments, and that now through the redemptive, mystical power of science mankind has been transformed into a blessed state of rationalism.
So how would an educated Greek respond to the question of what causes lightning? Fortunately we can actually have an answer to that because we have some of the standard science texts from ancient Greece! In a 1965 article by H. Howard Frisinger in the Bulletin of the American Meteorological Society entitled “Early Theories on the Cause of Thunder and Lightning” Dr. Frisinger briefly the different theories of how lightning worked that were taught by various Greek philosophers.
All of the views of how lightning worked were based on the standard Greek physics of the four elements, earth, water, air, and fire. The theories taught by the Greeks, and the answer that your average educated Greek would give, generally attributed movements of air to be the cause of thunder (just like we teach today), and the motion or effects of fire (sometimes aether) as it interacted with the water and air in the clouds. There was debate about what came first the thunder or the lightning, and there was debate about whether or not one caused the other or if they were entirely separate phenomena.
The most widely accepted theory came from Aristotle who wrote that both thunder and lightning are a result of motions of air colliding with objects, such as clouds or other masses of air. If there was sufficient fire in the clouds then a lightning bolt would be formed, and depending on the purity of the fire you either get a defined bolt or a diffuse flash of light in the cloud. He made his arguments by looking at the evidence, such as when a local temple was struck by lightning, or how lightning was know to burn some kinds of materials but leave others unblackened.
These theories were put into the standard science textbooks of the day and would have been expected reading for an educated Greek. Just like today there would have been people who had no idea what the standard “scientific” explanation of lightning was. There has not been the assumed progression from less rational to more rational thought as is commonly asserted by those who promote science and eschew religion. The evidence does not support that theory.
So, what is my point?
People are more or less the same – 5000 BC or today. And there’s a lot of evidence to support the theory.