Who is our REAL Enemy? 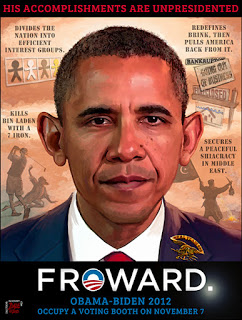 Who is our real enemy?
Turn on the news and watch CNN, MSNBC, ABC or any of the mainstream publications such as the Washington Post, New York Times or listen to National Public Radio.
They are completely vested in perpetuating the administration of Barack Obama and in furthering any lie, no matter how outrageous. Case in point: The attack of Jihadists on the US Consulate in Benghazi, Libya on September 11. 2012.

Barack Obama and his minions are so used to controlling the press that they seem to think they can get away with anything. Thus, the eruption of anti-American riots from Morocco to Pakistan, beginning on September 11, is chalked up to a spontaneous eruption of entirely understandable Muslim distress over an otherwise-unknown YouTube video. Never mind the RPGs and machine guns. And when an American ambassador is murdered and dragged through the streets of Benghazi by a howling mob, not to worry: there was no negligence in failing to provide security; the ambassador, Chris Stevens, died essentially by accident from smoke inhalation; and his body was discovered by a group of friendly Libyans who rushed him to the hospital. Sure.

The main threat to the administration’s cover-up has never been American reporters, almost all of whom are desperately trying to get Obama re-elected. Rather, the danger is that more of the cell phone pictures and movies that were taken by Libyans of events in Benghazi and, in particular, of Ambassador Stevens, inevitably will surface, and will disrupt the administration’s narrative.  How dare the Libyans tell the truth of their murderous rampage?

That may be starting to happen. This cell phone video purports to show the moment when the Libyan mob discovers Ambassador Stevens. Is that really what it depicts? I can’t tell. The setting appears right, and Breitbart.com says the victim’s clothing matches what is seen in later photos of Ambassador Stevens. I can’t judge that. But there is a sickening credibility to the poster’s claim that what we are seeing here is Ambassador Stevens being dragged from the “safe house” that turned out to be unsafe and, as far as I can tell, undefended. Here it is judge for yourself: (h/t Pamela Geller, Atlas Shrugs)

Libyan President Mohamed Magariaf spoke on CBS Face the Nation today (Sunday) supporting the position that Congressman Rogers (R-MI) and Senator McCain (R-AZ), saying he had “no doubt” the attack was pre-planned. “It was planned, definitely, it was planned by foreigners, by people who entered the country a few months ago, and they were planning this criminal act since their arrival.”

This is sharply at odds with the official position held by the Obama Administration, to wit, that it was a spontaneous demonstration against an obscure YouTube video preview that almost nobody in America was aware of.

What Carney, and the Obama administration says is, that if we, as Americans, were only just a bit more sensitive to our Muslim brethren, they’d all love us and we’d all just get along. This is the old 1960s ideal, expressed in the John Lennon song Imagine. In effect, the leftist dogma says: “We will give up any and all of our principles in order to get along with the rest of the world.” (Self Evident Truths)

If the Obama Administration’s foreign policy is deeply flawed (and it is), only the mainstream media stands between the truth and results that they don’t want to see in the upcoming presidential election – and by all accounts, it’s a close race.
Imagine what loss of credibility that the Mainstream Media will suffer if a new Republican Administration takes office and begins to uncover what they have hidden from the American people for the last four years. The vanishing viewers on MSNBC and CNN will be reduced further still, eroding profits. So they further the lies and outright distortions with glee as Chris Matthews feels that old familiar tingle running up his leg.
Aggression unopposed becomes a contagious disease.