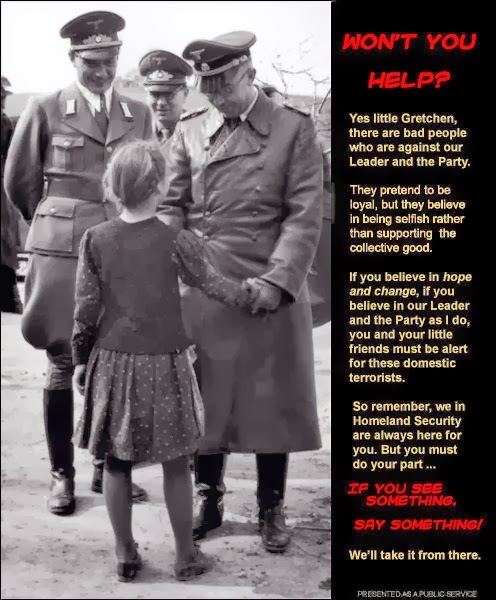 There are domestic terrorists everywhere using monikers such as “patriot”, “oath keeper” and “constitutionalist”… They advocate dangerous things such as the Second Amendment and can often be found in the ranks of the National Rifle Association and the Republican Party. They advocate a right to life and are philosophically opposed to Dear Leader. They are embedded in the Tea Party and don’t want to give of their means to benefit those we have designated as less fortunate.

It’s interesting that on two occasions early in the Obama Presidency, they established “rat lines” where people were supposed to report “fishy statements” on the Internet or sentiments expressed by family or neighbors. They had an office in the White House to sift through those. It didn’t work for a number of reasons. Many tens of millions of (armed) Americans reported themselves and/or simply poked fun at the Administration by reporting Obama, Holder and the ever fishy Biden.

It has to burn the authoritarian little heart of New York Governor Andrew Cuomo, but New Yorkers are refusing to use an anti-gun tipline used by the NY SAFE Act to rat out fellow citizens who are refusing to comply with the state’s blatantly unconstitutional gun laws. Two years of intense activity and tens of millions spent on advertising the snitch program, they have one arrest to show for it.

The tactics of using the Internal Revenue Service to attack Tea Party groups and Republicans who financially supported Mitt Romney were more successful. Nobody would find that surprising if it had happened in Mao’s China, Stalin’s Russia or Kim’s North Korea. It is surprising that it happened here — and that the President signed off on it as recently as his interview prior to the Super Bowl with O’Reilly last Sunday.

The Tea Party was a spontaneous grass roots movement that sprang into being as a reaction to the Obama Presidency. The Democrats and their cat’s paw, the mainstream media, immediately went on the attack to try and demonize the people who participated in demonstrations as “evil racists”. I went to several Tea Party events, I carried a sign along with others and all I saw there were people of all races who opposed the present regime’s dangerous spending policies. Sen. Barbara Boxer (D-CA) pronounced that the Tea Party had to be fake because the protestors were well dressed. That’s because many of them took time off work to be there. The American tax payers (all 49% of them)  have jobs. It’s a concept lost on Washington DC.

Ask not for whom the bell tolls.