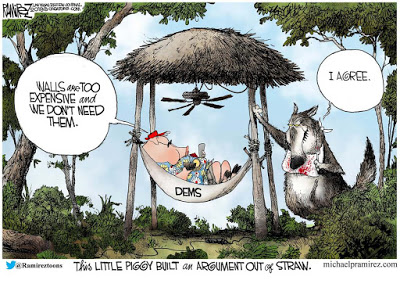 Facebook
Twitter
Pinterest
WhatsApp
Housekeeping
For those of you who follow this blog, personal illness has kept me from beginning the move to the White Wolf Mine this past week. It’s that whole cold and flu season thing. You think that you’re going to die, but you don’t. However it’s incapacitating.
Helpful hints: If you think that you’re getting the stomach flu and you feel as if you might throw up, crack open a can of peaches in heavy syrup and drink a tablespoon of the nectar every thirty minutes. It makes the barfing more tolerable. Not tolerable, more tolerable.
And when you’re finished with the purge, start on Gatorade…and maybe some chicken soup…and saltines. Replace the fluid and electrolytes that you lost.
Caravans

More are forming in Honduras and Guatemala because there are desperately poor and miserable people there and they want to get out of their situations. They will continue to form and come North so long at the US releases them as soon as they’ve gone over the fence (not at all a WALL). Many of them bring diseases we haven’t seen in the US for a long time, they are uneducated to any standard we’d recognize and and don’t speak English, so end up working under the table in the agriculture industry for sub-minimum wages. It’s the sub-minimum wage thing that keeps the WALL from being built. There are a lot of ‘good old boy Republicans and Democrats’ out there who don’t want that WALL.
There are a lot of people born into human misery under circumstances where there is scant hope of escape. A lot of what we call misery in the US would NOT pass for misery in the third/developing world. Volumes have been written about it, and I need not add to it here. Suffice to say that so long as Americans are willing to sit still for the situation, it will still be a situation. Gumballs
Human Travel to Mars?

There is an interesting article HERE about Astronaut Scott Kelly’s health issues after having spent a year in space. Given this, we all need to take a deep breath before we start talking about sending an expedition to Mars. There are a number of serious issues that need to be considered well and apart from moving beyond the protective radiation belt that surrounds Earth (and to a lesser extent, the Moon). Landing a bunch of sick people on Mars essentially means that their chances of surviving once they arrive are drastically reduced. A human trip to Mars given our current technology is a one-way ticket. Nobody will be coming back. Weigh that against far less expensive robotic exploration.

It might be possible to build a space elevator and use other innovations that would make construction of a sufficiently advanced spacecraft (creates its own gravity) possible. Better still, send three or four spacecraft in convoy to Mars. It would cost trillions of dollars. But by then, our national debt may be $100 trillion so the cost of the program would be equivalent to a ’rounding error’.