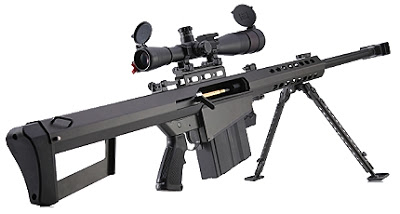 Facebook
Twitter
Pinterest
WhatsApp
New Jersey wants to ban .50 BMG Rifles (read about it here). Despite the Bill of Rights, the New Jersey Legislature cites an overarching threat to the public from .50 BMG caliber weapons.
How many crimes in New Jersey have been committed using .50 caliber rifles? How many victims of .50 caliber weapons attacks or their widows were paraded before the New Jersey legislature in their march to ban the hated cartridges?
That’s right – ZERO.
That’s because there has not yet ever been a criminal attack in New Jersey with a modern .50 caliber rifle. ( 200 years ago, .50 caliber muskets may have been used to commit crimes) Maybe one day there will be and the ban will somehow (in a strange universe) seem to be vindicated. I’m waiting for the day when an inner city youth lugs the weapon (below) into a convenience store and announces that it’s a robbery. You don’t see that in a Hollywood farce, but you do see it in the New Jersey Legislature with Gov. Chris Christy leading the charge.
The Barrett .416 (below) would still be legal in New Jersey. 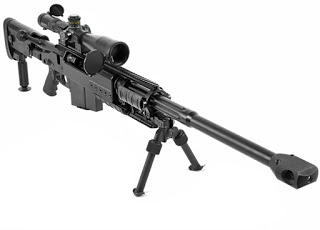 And the ballistics of the .416 are more impressive than the venerable .50 BMG.