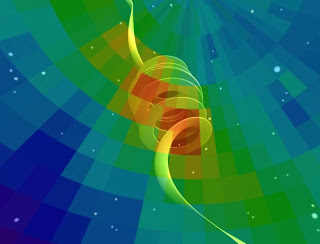 Facebook
Twitter
Pinterest
WhatsApp
Earth is protected from harmful radiation from the Sun by it’s hard metal core that produces a strong magnetic field. As we orbit the sun, there is a bow wave of pressure that forces cosmic rays and heavier atomic particles around the little planet we live on. Without it, everything on Earth would die.

The Interstellar Boundary Explorer (IBEX) mission has located a mysterious ribbon of energy that surrounds the solar system and protects us further from galactic and cosmic rays originating outside of the solar system.

LINK HERE “The finding, which overturns 40 years of theory, provides insight into the fundamental structure of the heliosphere, which in turn helps scientists understand similar structures or “astrospheres” that surround other star systems throughout the cosmos.

“The ribbon of energy was captured using ultra-high sensitive cameras that image energetic neutral atoms (instead of photons of light) to create maps of the boundary region between our solar system and the rest of our galaxy.”

Rendering of ribbon. Scientists have isolated and resolved the
mysterious “ribbon” of energy and particles discovered in
the heliosphere — the huge bubble that surrounds our solar system
and protects us from galactic cosmic rays.
(Credit: IBEX Science Team/Goddard Scientific Visualization Studio/ESA)
I don’t know how many planets like ours are out there. Without tectonic plates, there would be no dry land (no mountains), without liquid water, there would be no life, without a solid iron core there would be no magnetic field, and on – and on. I refer you to the linked article above for an interesting journey into the mechanisms that exist to protect fragile life on the Third Rock from the Sun.