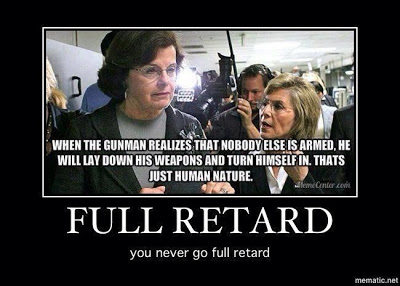 “If you will not fight for the right when you can easily win without bloodshed; if you will not fight when your victory will be sure and not too costly; you may come to the moment when you will have to fight with all the odds against you and only a small chance of survival. There may even be a worse case: you may have to fight when there is no hope of victory, because it is better to perish than to live as slaves.” -Sir Winston Churchill

What are our politicians saying?

Senator Dianne Feinstein (D-CA) “When the gunman realizes that nobody else is armed, he will lay down his weapons and turn himself in. That’s just human nature.”

A difference of Opinion

I will not register my weapons should this bill be passed, as I do not believe it is the government’s right to know what I own. Nor do I think it prudent to tell you what I own so that it may be taken from me by a group of people who enjoy armed protection yet decry me having the same a crime. You ma’am have overstepped a line that is not your domain. I am a Marine Corps Veteran of 8 years, and I will not have some woman who proclaims the evil of an inanimate object, yet carries one, tell me I may not have one.

Boston went on to say that he is not a “subject,” “servant” or “peasant” and should not be punished because of the acts of an evil man. “I will not be disarmed to suit the fear that has been established by the media and your misinformation campaign against the American public.”
I wonder if all Marines feel the same way? 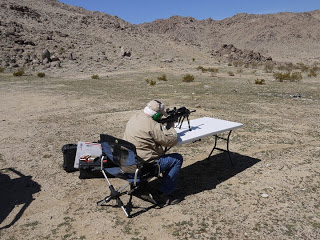 There are a lot of veterans in America bitterly clinging to God and guns. Of those people, most can shoot the eye out of a squirrel at at least 800 meters. They were trained to do that by the government that brought you a number of sequential wars. Some of them were “small wars” some of them were “large wars” but the United States has been in an at-war posture for many decades now. The “bitter clingers” simply wish to be left alone.  A hunter in New York was asked why he didn’t feel that he needed an assault weapon. He replied that the government agents who might wish to confiscate firearms were well supplied with that armament, web gear, magazines and ammunition and that if one wanted an assault rifle, one was there for the taking.

A Brief List of Wars that the US has been involved in since 1950. Keep in mind that there are small wars – ‘brush wars’ – where the US sent special forces that are not included here. Never the less, the US has been turning out guys who cash checks and snap necks for a very long time. Yes, the US has built themselves some mighty fine killers.

National Front for the Liberation of South Vietnam(NLF)

Libya
Invasion of Panama or
Operation Just Cause
1989-1990

Bombings of Afghanistan and Sudan or
Operation Infinite Reach
1998

Operation Enduring Freedom
Part of the War on TerrorIn Afghanistan:
In the Philippines:
In Somalia:
In Sahara:

al-Qaeda Organization in the Islamic Maghreb
Operation Iraqi Freedom or

al-Qaeda in the Arabian Peninsula

Libyan Arab Jamahiriya:
This list does not include US involvement in “secret wars”. There were a number of those and even though the personnel involved were comparatively few, there was a great deal of training and experience received.