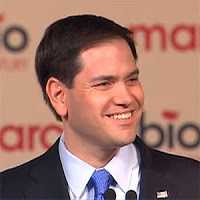 I’ve spoken to the man who was on the short list to be Secretary of the Navy had (Little) Marco Rubio been the Republican nominee. I don’t know if he’s on suicide watch now or not because he’s not taking calls. New York Times reporters hovering around the Rubio camp in Florida commented:

This is what the political equivalent of hospice care looks like. Senator Rubio’s friends, supporters and aides use words like “miracle” to describe the likelihood of a victory here in his home state on Tuesday. They soldier on through sparsely attended rallies, insisting, Trump-like, that his crowds are larger than they appear.

His top donors, who gathered in Miami Beach for a two-day retreat planned as a victory party, are now contemplating a desperate Plan B: which candidate or which group they might instead pool their resources behind to stop Trump.

There is a sense of disbelief. The GOP elites that rallied to Rubio’s side don’t grasp that it was their presence and endorsements – particularly those of Mitt Romney – that finished Rubio. His crass comments about Donald Trump’s penis (which Trump tells us that Rubio has never seen) helped sink him, but transferring his identity from ‘Tea Party Candidate’ to the darling of the GOP elites drove a stake through his heart.

Despite pressure from conservative activists, the news media and rivals like Mr. Trump to bow out and avoid the humiliation of a home state loss, Rubio refuses to quit until the votes are tallied and he’s soundly thrashed in his home state.  Clearly that is Rubio’s option. To date he’s won Minnesota, Washington DC, and Puerto Rico. He was likely to win Utah at one point but everything points to a Cruz victory there at this point.

“If things don’t go his way, it’s not his fault,” said Ralph Arza, who served with him in the legislature. “They are not voting against Marco Rubio.”