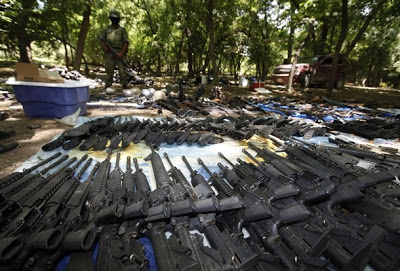 Facebook
Twitter
Pinterest
WhatsApp
The Obama Administration and by extension the Bureau of Alcohol, Tobacco, Firearms and Explosives (ATF) has stridently blamed Americans guns shops (Free Republic) as the source of firearms for Mexican drug cartels. As we found with Operation Fast and Furious, a subset of Group 7 Operation Gunrunner, ATF’s poorly conceived and mismanaged activities seems to at fault for the death of at least one Federal Agent. (CBS NEWS)

An arsenal seized by the Mexican Army – Weapons that were made in America,
sold to Central American governments and then subsequently sold to or “stolen from inventory” by the Cartels.
However, Wikileaks has opened a new avenue of investigation to the real source of firearms flooding into Mexico. Last Tuesday, the Spanish language newspaper, La Journada published US diplomatic cables disseminated on Wikileaks that clearly indicate that the US is aware that the real source of military grade weapons and explosives is coming across Mexico’s southern border.

“Items such as grenades and rocket launchers are stolen from Central American armies and smuggled into Mexico via neighboring Guatamala.” (US Embassy in Mexico to Washington DC – US State Dept. Message) The cables appear after three bilateral conferences on arms trafficking that took place between March 2009 and January 2010 in Cuernavaca, Mexico, Phoenix, AZ, and Tapachula, Mexico.

While there are 30,000 US Customs and Border Protection officers who patrol/protect/monitor the 1,926 mile US/Mexico Border, there are 125 Mexican immigration officials who monitor the 577 mile border between Mexico and Guatemala. (LINK) The Latin America Herald Tribune reports.
Who is more to blame for cartel weapons entering Mexico? Gun stores in the US, weapons sold at gun shows in the US or weapons crossing Mexico’s SOUTHERN border?
The Obama Administration and ATF would have you believe one thing. The truth is very different.